The Collective Noun for Booksellers

This time last week I was hanging with friends who own a bookstore in Eureka (MariaJoseph Books). I mentioned to Angelic that after the signing and dance workshop (yeah, you heard me) I wanted to swing by another bookstore on the way home, one BSR used books in Granite City, Illinois, because their owner Bruce Campbell had taken a shine to one of our foster cats, Hazel, and friended us on FB.

Angelic laughed. “I know Bruce. He and Joe (Angelic’s husband) met at Pudd’nHead when they closed. They were both scavenging shelves.”

Pudd’nHead was a lovely bookstore in Webster Groves. It closed last year–a real loss for WG’s charming downtown area. So Angelic and Joe decided to drive out with us.

We had let Bruce know we were coming; his wife Stacie took one look at us walking in the door, and said, “You’re Wendy, right?”

(I keep forgetting my picture is on the jacket flap of Little Bookstore. When people I’ve not met recognize me, I’m startled and think they’re psychic.)

Bruce had gotten trapped doing an errand, but Stacie and Angelic and I moved up and down the aisles of their store, discussing pricing issues, stock turnover, and cat occupancy levels. Jack said the energy crackling around us could have powered Los Angeles for three days.

BSR also has a literary bunny – the first I’ve seen besides my agent Pamela’s Louise. While Louise is something of a Manhattan sophisticate, BSR’s Willy was… more outgoing. He raced up and down and then tried to pounce me in a male sort of way.

As Angelic, Stacie and I agreed, when ya got it, ya flaunt it. 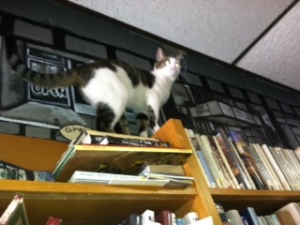 Jack took some photos as Angelic, Stacie and I talked a blue streak, ambling the stock. BSR’s story was like ours: out of work in a bad economy, they had $250 in savings. They piled their book collection together, bought an entire inventory of metal shelves and bookends from a closing store for $200, set their prices as $2.50 paperback, $5 hardback, and threw open their doors with one month’s rent between them and failure (the last of a final paycheck from a former job).

That was 2010. I admired their bookends, and Stacie gave me a dozen.

We compared notes on how we’d solved those pesky early-years economic problems–like eating or paying light bills–and talked about favorite customers. It was one of Stacie’s who’d come in waving Little Bookstore, saying “You must have read it, ’cause this is how you got started, right?! Did you write this under another name?”

A stealth of booksellers?

While we were there, another bookstore owner called, LuAnn from Afterwords Books in Edwardsville, Illinois. She’d read on FB that we were nearby and wanted us to come on up.  Afterwords had a very difficult time moving lock, stock, and shelving in 2012, and we’d befriended LuAnn in the midst of it. We couldn’t this trip, but we’ve made plans to when Jack heads to Colorado in October for his annual Prison Visiting Service Conference. 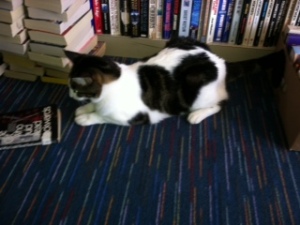 So, the bookstore is dead, you say? Amazon rules–and we all must play by theirs? Dog eat dog (or cat eat cat) and devil take the hindmost?

Ha. God bless the local entrepreneur who fights fire with water. We fly below the radar, offering Amazon price matching plans, doing good in our communities, anchoring our downtown districts, holding open our doors against the Goliath box stores by using REAL customer service and gentle, name-remembering welcomes instead of professional greeters.

A blessing of booksellers?

And God doubly bless the people like Stacie and Bruce, Angelic and Joe, Lou Ann, Larry Bowen out in Rolla, Missouri, and yes, Jack and me, who all know that small shops can do big things in and for their community.

15 responses to “The Collective Noun for Booksellers”