Tails of Dogs and Cats

I’m a bit of a fan of Alexander McCall Smith, ever since I stumbled across the No 1 Ladies’ Detective Agency series. I also fell for his Scotland Street series as well – particularly for his very accurate depiction of a certain element of Edinburgh society with which I’m familiar. The slightly down at heel Georgian New Town intelligencia, complete with their locked private gardens!

One of the characters in the Scotland Street series is a dog called Cyril and McCall Smith manages to get inside his mind wonderfully. In many ways Cyril became one of my favorites.

But then along came the incredible Freddie De La Hay – one of the residents of Corduroy Mansions a new series set in the Pimlico neighborhood of London. Freddy is first introduced as an ex-drugsniffing dog made redundant from Heathrow Airport as a result of a campaign against sex discrimination (all the drugsniffers were male). Once again McCall Smith gets right inside the mind of a dog as it smells its way around its world, eating expensive shoes and catching Russian spies along the way. Despite a fascinating range of humans, it’s the dog that once again does it for me!

What got me thinking about this was an experience I had yesterday. We took in an older cat a few days ago that had initially been rescued by our friend Jessica. She was going to keep her, but her existing feline co-habitee didn’t approve at all. So Jessica paid to have Sweetie Pie spayed and then she came to us until we can find her a permanent home. All well and good!

Wendy left at lunchtime yesterday for a couple of days of business in Richmond and I was left keeping an eye on the lodger. Sweetie Pie seemed quite content relaxing on a stool in the mystery room. Then Kellie, our cafe chef, came in around 5 pm from a grocery run – “Sweetie Pie’s outside”, she said. “what?” I said – –

Sure enough – she was out in the front garden and when I went to pick her up she ran down onto the sidewalk. We both tried to catch her, but she kept running further off. eventually it got too dark to see where she was and I gave up. What on earth would I say to Wendy – and Jessica – how would we tell her that the cat she recued and paid to have spayed had run away on our watch? Wendy phoned later and I broke the news. We commiserated with each other and agreed that at least she had been spayed so there wouldn’t be exponential explosion of kittens.

Feeling disconsolate, I headed down to our basement bedroom and noted both dogs and our three indoor cats all in their favorite spots. Sitting on the edge of the bed to take of my shoes, I glanced up. Owen Meany had been lying beside Zora but now he was magically up on the window sill! No – wait – he’s still beside Zora – what? 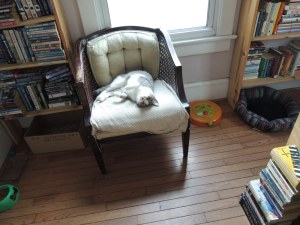 There she sat, calmly licking her paw and preening herself. “What?” she meowed – “fine neighborhood you have here. Nice cats! What’s for dinner?”

One response to “Tails of Dogs and Cats”