The Sweetest Mysteries of Generosity

Two large parcels arrived yesterday evening just as my friend Elizabeth and I were headed to Needlework Night. I wished afterward I’d opened them before we left.

They were from John, a nice man who has a soft spot for cats. He sent me his wife’s crafting collection, as Alzheimer’s had ended her use for it, and he wanted the cats to have its benefits. 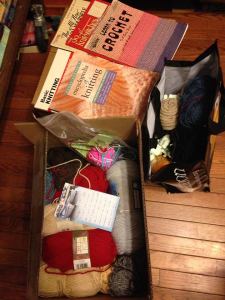 Among the oodles of lovely yarn and really nice cross stitches and books were a few items I’d never encountered before. Some looked like they were for knitting, which is great, because my friend Isabel and I have an arrangement; she takes the knitting stuff and brings me lovely character knit dishcloths to sell for the cats.

But amid the stitch counters and holding pins and needle tippers were some items that looked…. diabolical. In his sweet note John had said quite pointedly (ha ha, get it, pointed?) that he didn’t have a clue what some of the items were.

Enter the fine folk of CROCHET ADDICT, a list of some 70,000 participants on Facebook. I photographed the seven mystery items and put up the photo.

Oh dear…… Who knew there could be such debate about some items?Thankfully, there were no fistfights – and if you’re on a large crafting forum on Facebook, you know exactly what those cyberfights look like. If you’re not, well, think political debate, with yarn, add menopause and PMS, and then factor in that the discussion is exponentially more important to those participating than any rhetoric of politics.

Then run for your life.

Have a look, from top left being number 1 to bottom right being number 7, and see how many you can name. And then scroll down to see what the list came up with. The little photo is a close-up of number four in the picture, because the first time I posted, someone said the black bit was velcro. I’m no great shakes as a photographer.

ARE YOU SURE YOU’RE TIRED OF GUESSING?

1 is either a bobbin or a pompom maker, and quite possibly useful as both

2 is a cable knitting needle (think Fair Isle sweaters, because I am!)

4 is something to put over knitting needles to keep them from sliding off a project – except it might be a threader instead, depending on which faction you follow on Crochet Addict.

5 is a very old thread waxer – not even sure they make these anymore. You thread your thread (yes, I know, bad Wendy, verb and noun same word) through it and the beeswax keeps it from tangling and makes it stiffer for getting into the needle and working with on finer projects, like delicate quilting. (WHEE! I’m so happy to have this!!!!!)

6 is another kind of cable knitting needle – yo, Isabel!

7 is a (pick one) darning needle, amigurami needle, setting buttons into upholstery needle, surgical suturing needle. I’m cool with any of these. 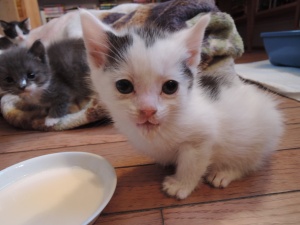 I’m also grateful to John for sending these and the rest of that big stash for the benefit of the Wise County Cats. Hadley and her friends say “THANKS MR. JOHN!”

And Jack and I continue to hold you and your wife in the light. Thanks!

4 responses to “The Sweetest Mysteries of Generosity”