Monday Book – My Song is my Weapon

Once upon a time (actually about eighteen years ago) Wendy and I were booked to perform at the Orkney Folk Festival off the north coast of Scotland. The festival took place in various venues in Stromness and we were accommodated in a lovely old hotel overlooking the harbor. Not surprisingly the hotel bar was a favorite gathering place late at night after the official concerts and ceilidhs were finished.

One night we found ourselves chatting to a young American lassie who said she had published a book we might find interesting! I immediately bought a copy and have now read it for maybe the fifth time –

As a young man in the late 1950s and early 1960s I was developing my left of center political views as well as a strong interest in folk songs. So I was well aware of Pete Seeger, the Weavers, the Almanac Singers, the connections to Woody Guthrie and Paul Robeson.

What I didn’t know was what had preceded this in the US and where all these people had in their turn served their apprenticeship, both politically and musically. 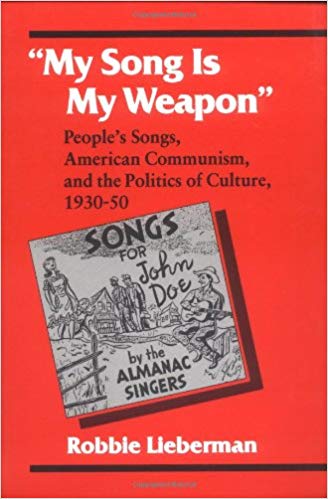 Lieberman’s book was a revelation to me in many ways –

First of all I had no idea how large and popular the US Communist Party was in the 1930s and how well accepted that generally was. Then again, I knew nothing about the ‘popular front’ and was fascinated to see how that had helped generate the ‘folk revival’ of the 1950s and 1960s.

There was much that was familiar too – the ‘redscare’, McCarthyism, the blacklist and so on.

I have to admit that on first reading I found the book pretty dense and hard going. However each time I’ve re-read it I’ve found it not just easier but more enlightening. Each time I find more gems I’d missed before!

I can thoroughly recommend this to anyone with an interest in 1930s US politics, the roots and routes of the 1950s folk revival or all three!

Jack makes it across the line again –

Wendy and I decided we needed a fire pit in our back yard. So I surveyed the area and decided where it should be. The only trouble was that a pile of brush gathered by our predecessor was already there. So off to confer with Dr Google about the easiest way to build a fire pit and what do about that brush.

It turned out that there was a state-wide ordinance in place that between February and April you can’t burn garden stuff before 4 pm or after midnight. We were still in April at this point!

I wandered out again around 5 pm and looked at that pile of brush while aware of the lighter in my pocket. Could I? Should I? I wondered afterwards if that’s how arsonists feel. Are they overcome with the desire to just see flames? Something outside of me took over and I set the brush afire!

As I watched it my first thoughts were whether the neighbors would complain or even phone the police.

But then I was transported back to another place – my childhood.

I remembered sitting in front of our coal fireplace gazing into the flames and being sucked into another world, while listening to favorite programs on the radio – Dick Barton, Special Agent; The Goon Show; Around the Horne – – –

My Dad was an expert painter and decorator and specialized in faux wood-graining and marbling. He made his own crayons from simple ingredients and dried  them beside the fireplace. Along with the smell of them drying came back the memory of the fish ‘n chip van outside sounding it’s horn and the smell of lard over that other open charcoal fire – – –

Do we have an old memory of the fire ceremonies that heralded the approach of spring and the new harvest? Is that why fire fascinates us so much?