A guest post from Jack on a special occasion –

It’s just a year since our beloved Valkyttie passed over the rainbow bridge and we can begin now to celebrate her more memorable escapades without breaking into tears.

For newer readers Val was our venerable bookstore cat/manager and was age 19 when she died. She began her life as a tiny abandoned kitten in the Leith cat and dog home in Scotland and we adopted her as soon as Wendy arrived in my homeland (as promised; I bribed her to marry me with early promises of kittens).

Val got her name because she was feisty (the valkyries were warrior princesses), but I wanted to be able to call her ‘Kittie’ for short. She displayed her bravery starting in her sixth week of life, by seeing off a local tom (ten times her size) who tried to use our yard as a shortcut. A seasoned traveler she moved effortlessly from Fife to Lancashire, then across the Atlantic to the US. Everywhere she lived, she established as her undisputed domain and took full charge.

When ‘The Little Bookstore’ was published we insisted she appear on the cover and the artist, a cat lover, obliged; she is sitting on the roof of our front porch. When the publishers of the large print edition asked for a photo for that front cover, we gave them a picture our friend Elissa took of Our Matriarch in full managerial mode, surrounded by bookshelves. Whether by accident or design, the Polish, Portuguese and Korean editions all have her hiding somewhere on their covers. Of course that means she garnered many new friends all over the world, while many of her less distant fans asked specially to meet her when they visited the bookstore.

During the last couple of years of her life, she had to put up with a continual stream of foster kittens. She could be quite stern with them, yet displayed grandmotherly traits with the more wayward ones.

Just yesterday our good chef Kelley made bacon and eggs for my breakfast and I found myself automatically moving to a less accessible corner to eat it. I realized that I was remembering that Valkyttie always noisily insisted on her share of the bacon.

When we lived in the tiny rural village of New Gilston in Fife she would always accompany us when we walked along our favorite woodland trail. In January I was in Scotland for the funeral of a friend and scattered Val’s ashes among those same trees.

That’s when I shed my tears. Now we just think of the happy times. Every cat is special, but once in awhile, a special x ten cat comes along. Valkyttie was special x 100.

And now she lives on; a friend of Wendy’s got ‘hold of another cracker of a photo Elissa took, and Valkyttie’s message will never die. 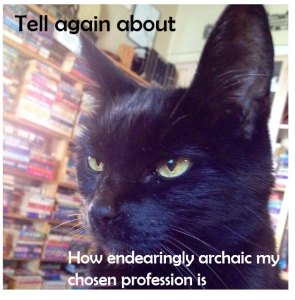 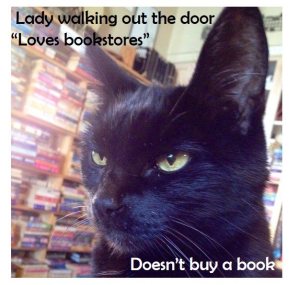 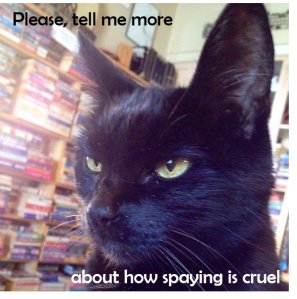