What do you do?

In a previous post I spoke about my visit to the Buffalo Bill museum in Cody, Wyoming a few weeks ago.

I felt I needed to put that into much more of a personal context, so here goes –

As I said previously my Grandad went to see the Wild West Show in Dunfermline in 1904, which was part of the last European tour by Buffalo Bill’s show and was augmented by additional subcontracted acts such as Zulu warriors as well as Cossack and Japanese horsemen.

I had always been intrigued by the notion of the cobbled streets of my historic old hometown being clattered by Native Americans and the Deadwood Stage, not to mention Sitting Bull and Annie Oakley! 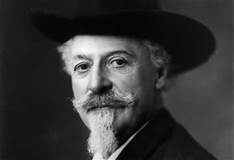 But back in the early 2000s I was roped into collaborating on a CD featuring my friend and folk music mentor, the late John Watt. John was a wonderful and very individual songwriter and most of his songs were written from a very ‘Fife’ point of view. The CD was titled ‘Heroes’ and one of these accorded this honor was Buffalo Bill. I discovered that John’s father had also witnessed that 1904 performance in my (and his) hometown.

We talked about this shared family history and it turned out that John had written a number of songs about that occasion, and two of them were to be on the album. One was a quirky and very funny one called ‘The day that Billy Cody played the auld grey toon*’ while the other was much more thoughtful – ‘The Wild West Show’.

The ‘Wild West Show’ describes the mix of acts, but also points out that the massacre of Wounded Knee had happened just a few years earlier and suggests that the answer to the ‘Indian Problem’ was to turn them into cheap entertainment, playing a parody of themselves in front of European heads of state.

John very rarely wrote ‘message’ songs, but this one, with a great tune and a very sing-able chorus has been covered by many other performers and is one my own favorites.

Shortly after we left Cody we deliberately drove to the site of the Wounded Knee massacre where we met a number of descendents of the survivors staffing tables by the side of the road. They weren’t selling trinkets or souvenirs; nor were they asking for money; they were just there to tell their story.

I felt very guilty that many of the Scots that were ‘cleared’ from the highlands and survived the coffin ships to reach America, then proceeded to ‘clear’ the indigenous folk they found there in turn.

The irony is that because this was the last tour, some of the Indians decided to stay on in Glasgow. A ‘ghost shirt’ they had brought with them ended up in a local museum and was finally returned to the US five years ago – quite a circular tale!

“The red man rides for the white man’s fee,
Better than a grave at Wounded Knee,
I better he never thought he’d see,
The spires of the auld grey toon*.

A big success for soldier blue, with the last brave dead in the snow,

What do you do with the Cheyenne and the Sioux?

You put them in a wild west show”

*The auld grey toon is an affectionate nickname for Dunfermline.

One response to “What do you do?”