Meanwhile, Back in the Bookstore…. 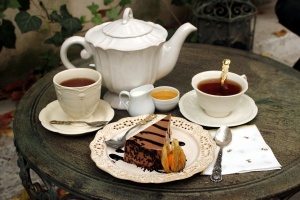 According to social media, the world is cracking down the middle, and “The World” means America. According to commercial media, a lot of dumb mean people elected a president. I’m not sure what “the people” are saying because I can’t find them behind the memes and the blaming and shaming.

Okay, so everybody’s mad at everybody, got it. Time to do a bookstore tidy. It’s small, but when everything outside is falling apart, at least I can manage a little cozy order  inside.

So I put the kettle on (okay okay, I opened a bottle of red wine) and started in. Good grief. In general fiction, Robert McCammon sat astride a Jamica Kincaid novel. She belongs in classics, he belongs in the nuthouse – well, horror. Lots of nasty werewolves involved in strange situations.

Over in history, I found a telenovel of The Tudors. No, no, no. The Tudors, smirking, went back to historic fiction. But sitting in brazen glory on that shelf was Hadley, our, ehm, special staff cat. Hadley lost a few brain cells during an oxygen-deprived birth, and, as we say in Big Stone, “She ain’t right.”

Hadley was playing a game with the Robert Harris alternate future novels – and what were they doing in historic fiction in the first place? She pushed the top one off the sideways shelf stack, waited until it tumbled to the floor some four feet below, and then pushed the next one.

And so it went. William Johnstone mounted his palomino and rode back to westerns from (in order of appearance) classics, mystery, paranormal romance, and Christian non-fiction. The Patricia Cornwells got rounded up and returned to clearance. I’m pretty sure one of them bit me.

And Carl Hiassen migrated from every corner to occupy the H shelf in fiction.

We culled some books, too. Sidney Sheldon, your time has come–and gone, and come, and gone. Hasta la vista, baby. We need the space for science fiction.

Outside, the world feels cold. There is no place for anything – not dissent, not agreement. Building a bridge has become sleeping with the enemy. Refusing to play along is derided as sore losing. We are literally in a place with no place for dialogue.

Outside. Inside, the bookstore continues to be itself: a not-too-tidy place where people of dissenting needs and plans are welcome. Where conversations will be civil and accompanied by tea, and where “everyone welcome” doesn’t have a hidden caveat. Where ideology and practicality and reality lie in messy alliance next to one another, and nobody can impose much order on them, nor tries. There will be other places like this in other parts of the country, pushing up green things between the concrete cracks. God bless the cracks.

How did holding still come to look like moving in the wrong direction? I dunno, but the shelves are tidy and the future looks messy and we have the kettle on.

We also have whisky. Y’all come.

10 responses to “Meanwhile, Back in the Bookstore….”