Still at Sylvan Lake, soaking in water and woods by day, and cocktails by night. Because the wifi is hard to get, I’m putting all the photos and video at the bottom in a string again.

When you’ve seen a six-foot male buffalo kick up his heels in a dirt bath, you know the definition of “party animal.” These massive creatures turn into eight-hundred-pound puppies, legs waving in all directions as they wriggle on their backs like worms. It’s like watching the Pope go swimming: one minute plodding along all dignity and grace ignoring the tourists with cameras, the next doing a high dive yelling “Bonsai!”

Thoughtfully, the buffalo had aligned himself about twenty feet beyond a sign describing the American bison, so the braver tourists dashed three feet from their cars to take a picture of Buff the Bather gamboling about like a prairie dog, just beyond the interpretive plaque depicting him as the symbol of Prairie Dignity.

In the car, Oliver, Barbara, Jack and I agreed: Buff had drawn the afternoon shift. While all the others were hiding out from the heat at the local watering hole, buying each other rounds, he had the high-traffic entertainment shift. Hence his need for a party piece, the ol’ hof-waving, back-wriggling, kick-’em-up high routine. Packs the house every time.

About an hour later, leaving the Wildlife Loop Trail, we passed the Custer State Park office. Barbara indicated it with a nod of her head. “That’s where they collect their weekly wages. Buff is the highest-paid, because of his dirt dance routine, but he’s training twin calves to take over next year so he can retire.”

It is a sign of how far we have traveled together that the rest of us nodded agreement, Jack adding, “Took him two years to work his way up from night shifts.”

None of the crew are as interested in the antics of the prairie dogs, though, and I have had to resort to trickery to get my daily fix. While Oliver very much enjoys the charm of the wildlife and the beauty of the Black Hills, he tailgates the person ahead until they pull over, then races on. Even a rare sighting of an antelope failed to stop his drive to, well, drive. So the next time I saw a particularly cute prairie dog village, I shouted, “Look there!” Oliver practically put us into a ditch, swerving to the side. I snapped the dogs, and since we now had to let all the people we’d passed pass us, Oliver scanned the horizon for what I’d been pointing at. Turned out to be a dying Black Hills Spruce. (The beetles are doing for them, 95,000 acres damaged). Oh dear, so silly of me to mistake that reddish tree for a buffalo/coyote/antelope/mountain goat. Well, let’s press on, shall we? 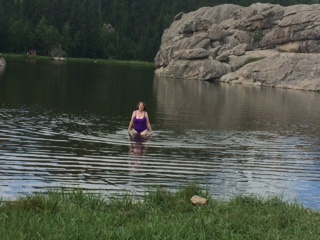 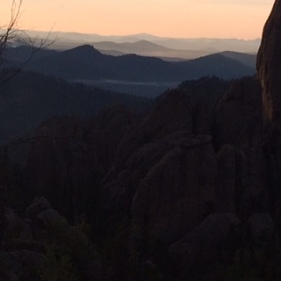 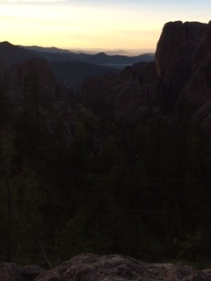