Early in the trip, we went to Takuwe (translates as “why”) which is a temporary art and narrative exhibit in South Dakota dedicated to helping people understand what happened at Wounded Knee (the first time mostly, although the second is mentioned). Then we went to the actual site. This is an intense thing, because the exhibit is beautiful and full of recordings and written words from survivors and eyewitnesses. The site itself has only what the indigenous people put up because the US government keeps reneging on a promise to build a national monument and park there. Graffiti told white people to stay out of the cemetery until promises about the land were kept, and sage had been burned and left in a bundle at the entrance.

At Little Bighorn (aka Greasy Grass, aka Custer’s Last Stand) an actual battle took place in which a WHOLE lot of white people died, whereas Wounded Knee was a full-on massacre with soldiers shooting into a ravine full of unarmed women and kids.

Both started with the the kids, though, because when Custer was sent to round up the Indians who had decided to not move to a reservation, he was expecting about 500 people; he didn’t realize the riverbank camp held more than 7,000, many of them Cheyenne Warriors because they and the Sioux were camped together as allies.

Also, the cavalry troop sent around to the South was probably drunk, because the commander (Marcus Reno) pretty much started the whole thing by ordering his men to form a skirmish line and rush the South end of the camp mowing down little kids and elders. Which went really badly for the soldiers because it set the torch paper to the dry wood of fury among the people who already felt crowded out and endangered. You hit someone else’s kid, you get what you deserve, and several of Reno’s men died badly.

It’s a site you should visit in person or online, because the whole story is too hard to tell, but there were two very poignant things to me. One is that the government eventually put up tombstones of red granite for natives and white marble for incomers  wherever they found bodies. Many of the white tombstones only say “a soldier of the seventh cavalry fell here.” And they start in a clump in fortifications on top of hills or behind valleys, and they end in pairs, backing up the hill. Which means that the guys killed their horses and used them as barricades in a circle, then when they ran out of ammo, they paired off and stood back to back fighting with their hands.

Custer went into the battle not thinking it would be a fight; he would round up the Indians who had refused to go to the reservations, and the Black Hills they had been promised, which held gold, would be sold by the elders to the US Government and opened for settlement. How far into the battle was he before he realized several mistakes meant he’d killed not only himself but  more than 250 men? Most of these were immigrants, about 40% Irish, a handful of Poles and others alongside. They’d come to the West to get rich. But the Indians had always been in the West, and the killing of the seventh cavalry became a symbol as well as an actual victory.

Those tombstones in pairs on the hills made me swallow hard.

After the battle Sitting Bull took everyone who wanted to go North into Canada. They lasted five years before harsh winters forced their surrender-versus-starvation to the US government.

In the battlefield museum was a picture of a Lakota woman taken in 1880, four years after Little Bighorn/Greasy Grass and ten years before Wounded Knee. She’s kneeling, holding a baby at the entrance to a teepee, the baby looking out with happiness and excitement at something unseen in the distance. The woman is looking at the baby, and in her face is captured every mother’s wish for her child: to grow up safe and happy, to have a sweet life doing things with their dad and grandparents; to become someone who does good while walking softly through the world. And underneath it, fear: what was her child’s life going to be now?

That was when I started crying.

You can see much better pictures online than these. I was in the moment and didn’t take many or very good ones. The guy in the bright shirt is Leland, our battle site guide. 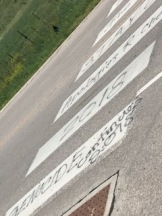