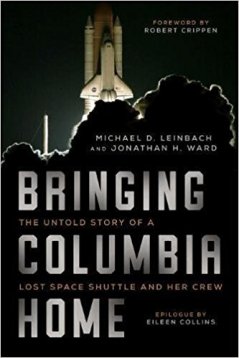 I stumbled upon this book in Greensboro NC where Wendy was doing a promotional event in a bookstore. Being a bit of an air and space freak I couldn’t resist it.

This is the whole story of the ill-fated Columbia space shuttle disaster, and Leinbach is probably the best person who could have written this book as he was at the center of the mission.

The book chronicles the whole tragic story from the first contradictory clues and suspicions all the way to the gathering of wreckage and crew remains. Along the way we encounter the interactions between rural Texans, Federal agencies, State organizations, NASA professionals, fellow astronauts and the family members of the doomed crew.

The things that stood out for me were –

The very sensitive handling of everything to do with the crew, their families and the inevitable evidence relating to their last minutes. The amazing ‘ownership’ by locals of responsibility for laborious searches for the tiniest fragments in pretty terrible conditions. Then the equally laborious technical work to try to establish what caused the catastrophe.

The book doesn’t shirk placing blame where needed but also lays bare the sheer risks that inevitably accompany space travel. I have visited the air and space museum in DC a number of times and always marvel when I look at the Apollo capsules. How anyone could sit in that atop a rocket and be blasted into space is completely beyond my comprehension!

Just last week I wrote about my memories of the PanAm 103 bombing over Lockerbie in Scotland and I couldn’t help drawing some parallels with the Columbia disaster. I suppose the biggest difference is that the crews of the space shuttles knew the risks involved!

Finally – it was shown after the cause of the crash was established that there would have been no way to rescue the crew even if the damage to the wing had been known. So, as they were carrying out their scientific work they were already doomed.

The book is written for the layman, is easy to read and I found it completely gripping from start to finish.

One response to “The Monday Book”