The Monday Book: THE HIDING PLACE by Corrie Ten Boom 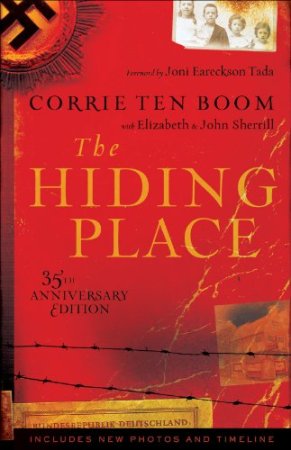 I thought about blogging this book in the wake of the Tree of Life Synagogue shootings, but wanted to wait a week.

Aside from the easy tease that tomorrow is a mid-term election and we’re all tired of politics and looking for a place to hide from it, this book is no joke. It is intense yet accessible.

For those unfamiliar, it is about sisters in a watch-repairing Dutch family, happy people with a strong Christian ethic. When WWII breaks out, they hide Jewish people. This brings them close to The Resistance–which they don’t work with, other than hiding and moving Jewish people as best they can. There is a poignant scene when Corrie is asked to pass along intelligence that she realizes will get a German officer killed, and refuses to do so. The young Resistance worker in her kitchen is gobsmacked and furious. They become suspect–despite considerable sacrifices.

The scene has come to me again and again in these turbulent times where no one can be neutral and expect to be left alone. If you’re not for, you’re against. You can’t stand in your kitchen and refuse to condemn one man to death while saving six more people in a closet upstairs. Both sides would kill you.

The Hiding Place also asks ethical questions about what it means to be light in a dark place. The family is eventually betrayed, and while the Jewish people they are hiding escape, Corrie, her father and sister do not. The latter two eventually die in a concentration (prison) camp. The women are in their fifties when the Nazis round them up. Betsy is not in excellent health. Yet she insists on standing at the edge of morning roll call, taking the brunt of the cold wind, so she can protect younger women. This infuriates Corrie. When a woman is beaten to death in front of them, Betsy and Corrie have very different reactions.

Corrie also talks about two Somali Jewish women who distrust everyone else in the hospital where she is meant to be a patient, but instead winds up bringing bedpans to others. When she attempts to help the women, who are isolated in language and race, they throw their gangrenous bandages at her. Corrie has to come to terms with what help means, when, and how.

I loved this book as a child too young to understand some of it subtleties. I loved it as a college student enough to write about it for a literacy project, igniting an interesting argument with a professor. I love it now because, in a storm of words bent on winning, it tells the story of a family that redefined what “winning” meant on their own terms. They paid for it, but they also left a legacy that allows Quakers and moderates, and quiet bunny rabbit peaceniks to find a place to stand when people all around scream “If you stand there you’re ______ (insert bad thing here).”

On Christ the solid rock I stand, best as I can interpret him in the whelming flood, alongside the Ten Boom Family, who did an amazing job of not being on anyone’s side while helping everyone they could.

Tagged as Corrie Ten Boom, for or against, moderates, Quakers, The Hiding Place, timely books

The Dogs of Peace

President Trump called a woman a dog on Twitter. He did this because she said a lot of nasty things about him. It is not okay for the President of the United States or any other man to call a woman a dog.

This is not Christian, servant leadership, an example from a man of faith and action. This is a nasty, foul thing for a man to do.

Many of my friends believe it is more important that Trump win the “war on Christianity” than any individual thing he does. My friend Mark (whom I love like a brother) says Trump didn’t mock that disabled reporter, it was a movement he made added to a clip from something else. My friend Katherine, the sweetest woman on Earth, who would spend her last dime rescuing a dog and kill herself on the highway to pick one up, says it’s okay that The President of the United States did that because women call men dogs all the time.

My friend Friedgaard had a little dog that attended Quaker Meetings with us in Scotland. She slept in Friedgaard’s arms until meeting was over, then jumped down and ate the crumbs from the teacakes off our plates. It was a ritual among this peace-loving group.

One day during the after-meeting tea, Friedgaard (who rarely talked about herself) said something about being a Hitler Youth. We all sat there, staring, as this kind, social-justice-dedicated woman said, “People say you had to know better. We didn’t. We were taught in school, we grew up believing that when we emptied a hospital, when we moved people, it was for the good of the community. God was telling our leaders what to do, and we were doing what God wanted, obeying our leaders. I cannot make people understand. They say ‘How could your own heart not tell you it was wrong? Didn’t you have a Bible?’ And I say yes, and the Bible was how we believed what we were doing was right, because we believed the pastors and the politicians who told us how to interpret it.”

“And I swore, when the war was over and we discovered that we were the most evil people on Earth, not the good ones, the bad ones, everyone hated us, then I swore, I would never again believe what the preacher, what the politician, told me God wanted. I would never pick and choose what to read in the Bible, I would never live without asking questions. And I never have. This makes me prickly. It makes me honest. I will never live before God as a lie again, with God’s help.”

There is no excuse for the President of the United States to call a woman a dog. He is not God’s man to win the culture war. He is the war.