The Monday Book: THE WAY OF TEA AND JUSTICE by Rev. Becca Stevens

I picked this book up off the counter of my friend Randy’s bookstore Oracle Books. He looked vaguely discomfited and said, “OK but I wanted to read that so bring it back?”

It was returned Saturday. Normally we don’t do Monday books unless they are enthusiastically appreciated, or hated enough to evoke 400 words. Tea and Justice was kinda middling, in all honesty, like a cup of good tea that has cooled.

Its premise is exploring the history of tea tangled with terrible social injustices toward workers, women, how they were denigrated (and worse) in the name of profits. And explaining how Thistle Farms and its sister Magdelene program (helping women leave sex work and addiction) embedded got its tea room up and going even as it struggled to sustain existing businesses and services. The whole book reads something between insightful and advertising how hard Thistle Farms is working to help people.

Tea does have a violent history, which Stevens addresses in one of the chapters. It also has a snobby history, another chapter, and an intellectual history that overlaps with this snobbery. My favorite chapter was the one on the Inklings (Tolkein, Lewis et al) and mortality; drinking tea is lovely, but what will you do with your life as well, Stevens more or less asks.

My beef with the book is that it continually circles in a naval gazing way and tells all its stories one-person-removed. A difficult encounter with a potential funder appears in two chapters, the first time using his undrunk tea steeping into bitterness as an example. The second time, the story bordered on revenge for Thistle Farms, the women’s center on which I had hoped this book would be centered.

Thistle Farms and the Magdelene Center seem like wonderful programs, yet Stevens makes much of their mileage without telling too many stories from them. There are three or four stories from the women at the ends of each chapter, not so much woven in as tacked on. They are moving. They don’t feel integrated into the planning.

So there’s the dilemma. The book has some wonderful insights, but they slide past in a dreamlike fashion, buried under ever-circling spiritual comments and self-plumping of the farm and its work. The book was written more to raise profits and awareness than consciousness, methinks. Which is not a bad thing, given the work the farm does. It just wasn’t as enticing as it might have been. I feel bad giving it a lukewarm review.

“Put the Kettle On”

Is it traditional to make your last post of the Old Year a True Confession?

When Jack and I did that string of author signings in October/November, friends who had published warned me to expect similar questions at each bookstore. But we found that for the most part (excepting, “How did you find an agent?”) questions were rarely repeated in different places.

We found it was comments, not questions, that tended to circle recurring themes: readers loved “Last Cowboy”; lots of participants made “we’ll put the kettle on” references; and people often interrupted at appropriate places with “You’re Nuts!”

But the questions they asked were as diverse as the audiences and the shops themselves. So when someone asked me about my author advance, I wasn’t prepared. She only wanted to know what I’d done with the money, nothing more invasive, but it still startled me.

Truth is, the day after I signed the contract with St. Martin’s and everything was official, I went on a little spending bender. Yes, it’s embarrassing, but straight to the Signals catalog did I go, and dropped $60. You know those sweet little white cups with “Sereni-tea” etc. printed on them? I got the four I’d always wanted. Silly though it is, I’d coveted those things for years, thought they were cute, but considered it silly–even un-Quaker-esque–to pay $15 for a household item available for 10 cents at any yard sale.

Until I became an author, and a much-published friend’s exact words to me were, “You should go buy yourself something you want.” 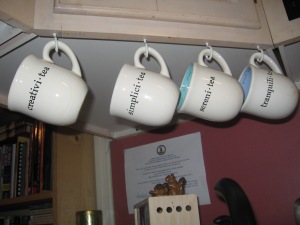 Ah. Permission from an elder. That made it okay.

The Sereni-tea, Creativi-tea, Simplici-tea, Tranquili-tea mugs hang in the one corner of our bookshop that is private—our wee kitchen with the microwave, electric skillet and teakettle from which Jack produces masterful meals. And every time I walk past them, I smile. Perhaps at my folly, or perhaps because I own them. Sometimes it doesn’t do to analyze.