So yesterday my friend Destiny came careening into the shop about half an hour before closing. It was a desperate situation: her ten-year-old daughter had just declared she didn’t like reading any more.

Destiny bought her the first Harry Potter, the first Artemis Fowl, and a couple of “I like this cover, Mom” paperbacks.

Understanding the gravity of the situation, I suggested RL Stine. Not normally my first go-to, but needs must when the devil drives.

We loaded the child with books, and then Destiny looked around. “Where’s Jack?”

“Scotland,” I said. “Remember?” But she shook her head.

“My son Jack.” Her eyes took on the wild panic of a mother whose child has been quiet too long.

We found Jack “playing” with the foster kittens.  This involved a lot of strangulation, alternated with cuddles and coos. The kittens looked terrified. The instant Jack released them under his mother’s orders, one leaped into a laundry basket and peed itself, while the other cowered behind a chair, hissing.

The blond, bespectacled moppets frolicked to the front of the store after learning that “there’s another kitty in there” (staff cat Owen, a sturdy boy, strongly built) and I closed the door on the kittens to let them recover.

But of course it took wee Jack only seconds to realize he’d been had. “This is a big cat. Where’s the little cats?”

Smart kid. We explained that it was nap time for baby kittens. Jack burst into tears and declared that, unlike his sister who had gotten “a lot” of books, he hadn’t gotten any.

Destiny narrowed her eyes. “You said you didn’t want one. You just want to go back where the kittens are.”

Innocent and wide-eyed, the boy gulped assurances that he really, really needed a book.

“Here,” said Destiny, pointing to the adult historic fiction. “Pick one.” Needs must.

I held my breath as Jack’s tiny fingers hovered over The Other Boleyn Girl. But he moved on, taking a Judith Tarr with a pharaoh head on the cover.

Destiny later Facebooked me this message: “Mom, this book is making me crazy.” – Jack on the way home.

I really don’t know where Jack gets his sense of drama. 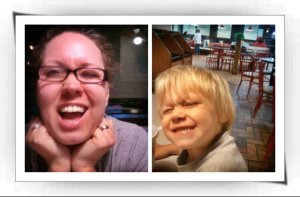 “Is that kid coming back?”

7 responses to “A Kitten’s Destiny”