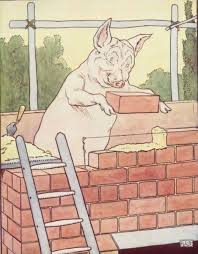 “I told them a thousand times if I told them once:
Stop fooling around, I said, with straw and sticks;
They won’t hold up; you’re taking an awful chance.
Brick is the stuff to build with, solid bricks.
You want to be impractical, go ahead.
But just remember, I told them; wait and see.
You’re making a big mistake. Awright, I said,
But when the wolf comes, don’t come running to me.
The funny thing is, they didn’t. There they sat,
One in his crummy yellow shack, and one
Under his roof of twigs, and the wolf ate
Them, hair and hide. Well, what is done is done.
But I’d been willing to help them, all along,
If only they’d once admitted they were wrong.”

This is from Story Hour, published in 1963 by Sarah Henderson Hay, the most popular and enduring of her six poetry works.

I love fractured fairy tales as much as I hate poetry. (There, now I’ve admitted it. Likely this diminishes me in your eyes, but usually I just don’t get the stuff.) But as my friend Teri can testify from yesterday’s blog, I love fiction that analyzes dysfunction. Hay calls Hansel and Gretel juvenile delinquents; Rapunzel chooses safety over love; the Goose Girl  princess hates court life and longs for the little farm boy back home, “who knew better games to play than Ring around a Rosy.”

Yeah, they’re kinda raw. And beautiful. My all time favorite line about storytelling is from Hay’s interpretation of Jack and the Beanstalk: “Was no one sorry for the murdered giant? How requisite to every fairy tale, a round-eyed listener who asks no questions.”

Hay has a way of revealing troublesome undercurrents, turning the unexplored but-how-did-the-minor-characters-feel moments into startling new ways of seeing. Mother Hubbard, told from the dog’s point of view, is gut-twisting, counterbalanced by the stepmother’s cheery prattle regarding Cinderella.

It used to be hard to find this book, but with reprints appearing across the academic spectrum, this little gem should be fairly easy to lay hands to. I highly recommend doing so.

https://libwebspace.library.cmu.edu/specialcollections/shhay.html has information about Hay’s life and literary collection, if you’re interested.

And although Story Hour is my favorite of her works, she wrote a lot about Christianity, too.

I tracked Him to the mind’s far rim.

The valiant Intellect went forth

To east and west and south and north,

And found no trace of Him.

We walked the world from sun to sun,

Logic and I, with little Faith,

But never came to Nazareth,

Or found the Holy One.

I sought in vain. And finally,

Back to the heart’s small house I crept,

And fell upon my knees, and wept;