Lost in Translation, Found in Humor

This is Hyoung Eun. She translated Little Bookstore into Korean and got it a whole bunch of great publicity over there. And we really enjoyed chatting while she was working on the book and she loves cats, so of course, we became Facebook friends.

With the result that sometimes my Facebook timeline reveals lovely, inscrutable conversations like this one, which appeared below the picture of this lovely, fluffy white cat that I think is Hyoung Eun’s, and pregnant:

원고료 받으면 얘꺼부터. 달라고 기다리고 있지만, 너 아까 간식 먹었잖아…
나는 아직 겨울옷 장만도 못했는데, 겨울 다 가버렸네.
The manuscript fee received, showed it off. Waiting for him, but if you like I ate a snack …
I still haven’t get winter clothes, winter is gone. -_- (Translated by Bing)
Okay, let’s admit that’s a beautiful haiku, but say what, Bing Translator? Hyoung Eun speaks flawless English, but of course she was talking to her other Korean friends there, people who are also friends with me but read my book in their native language and don’t use English as their primary on Facebook. Thus I offered the following.
Wendy Welch Adorable! (This seemed like appropriate and safe commentary.)

홍장근 커피Coffee (Translated by Bing)
Hyoung Eun and friends, I want to thank you for the fun you’ve added to my life, and I hope your pregnant male cat enjoys the coffee. (Yes, everyone, we all know that cats mustn’t have caffeine.) And I want to say that Hyoung Eun is a better translator than Bing will ever be. And that the butterfly in the winter snowstorm is beautiful – almost as beautiful as Hyoung Eun’s sweet kitty. God Bless us, every one! 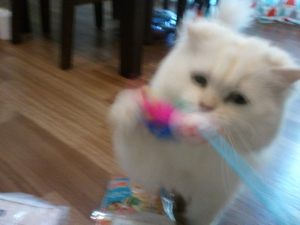 One response to “Lost in Translation, Found in Humor”