Moomintroll isn’t the name of a book, but the character created by Jansson. Moomin, as the little white hippo-like troll with the tail is known, lives with Moominmamma and Moominpappa in a valley, but the little guy gets around.

The books are full of gentle illustrations of the trolls and their friends, particularly Snufkin and the Snork Maiden (Moomin’s love interest). Although a cheerful little guy, Moomin can be quite moody and wax philosophical over small events–like discovering seashells. 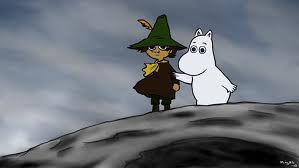 I loved these books because the trolls were adorable and nothing threatening ever really was allowed to get out of hand, despite the sometimes rather dark story lines and illustrations. As an adult, I go back and read them when times are tough. You just can’t have angst when you’re catching up with the Moominfamily.

The Moomins, despite the baby boy’s growing up, can be counted on for consistency in a world of chaos. That’s why I like the books – well, that and the adorable drawings. Moominpapa says things like, “I only want to live in peace and plant potatoes and dream!”

What’s not to love? Papa also likes his whiskey. Don’t get the idea that these little guys dance through fields of flowers never saying anything meaningful.  Here’s their take on the arts:

“A theatre is the most important sort of house in the world, because that’s where people are shown what they could be if they wanted, and what they’d like to be if they dared to and what they really are.”

They’re really quite advanced in their philosophy. 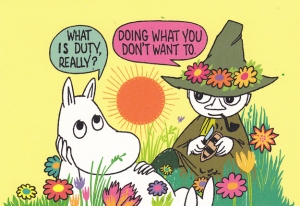 Check out a Moomintroll. Your library will have them in the children’s section.

Filed under book reviews, humor, Life reflections, out of things to read, YA fiction

One response to “The Monday Book(s): Moomintroll Adventures by Tove Jansson”