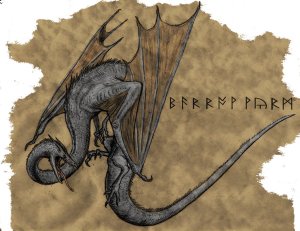 I don’t, as a rule, like enigmatic books, so it’s kinda weird that I liked this one. I also tend to hate books where bad things happen to sweet little fuzzy creatures–but, well, okay, the creatures in Wangerin’s book are not all that sweet, but a lot of them are fuzzy.

What cracks me up is that this book, full of sex, violent, anarchy, anti-christ characters, and really bad things happening to animals, was classed a children’s fantasy novel when it came out in 1978. Because, you know, it’s about animals. Like Animal Farm, or Firmin. So it must be for kids.

Prepare for nightmares, then.

The book is about a pre-human Earth with two countries divided by a river, each run by roosters (yeah, it’s that kind of world) but while one is a strong–if flawed–hero, the other is weak and easily manipulated. This old bird falls for an empty promise made by the evil dragon that lives at the center of the Earth and is always trying to get out and end the world (the plot of about 97 different fantasy novels AND some really scary prophecies handed down by storytellers in multiple cultures; think Armageddon with Satan cast as a worm).

The betrayal of this promise sets off the terrible war that results between the real animals led by Chanticleer the Rooster, and the army of basilisks created by Cockatrice, aka the dragon force-breeding with every breathing thing on the other side of the river.

The writing is antiquely beautiful (what some people might call stilted, if you don’t like that kind of thing), and while the book is definitely Christian, it’s less allegory than full of symbolism–like about the dun cow, herself. Here’s a section just before the big battle:

The dark land everywhere held still, as if on purpose before such a ringing, echoing cry. The dark sky said nothing. The Rooster, with not an effort to save himself, sagged, rolled down the roof, slipped over the edge of the Coop, and fell heavily to the ground. Wind and sobs together were knocked out of him; he lay dazed.

And then it was that the Dun Cow came to him….

Horns strangely dangerous on one so soft stood wide away and sharp from either side of her head. Her eyes were liquid with compassion – deep,deep, as the earth is deep. Her brow knew his suffering and knew, besides that, worlds more. But the goodness was that, though this wide brow knew so much, yet it bent over his pain alone and creased with it.

…. Nothing changed: The clouds would not be removed, nor his knowledge plenished. But there was this. His grief had become her grief, his sorrow her own. And though he grieved not one bit less for that, yet his heart made room for her, for her will and wisdom, and he bore the sorrow better.

And one more reason to love The Book of the Dun Cow comes in the form of a depressed dog who, in the trope of tragic fools everywhere, actually gets in the end to do the deed that needs doing. I really enjoyed Wangerin’s work, with its mythological, old-world language feel, its enigmatic storytelling, and its pack of beasts ranging from cute to terrifying. It’s fantasy at its finest.

But I would never, ever, read this book to a kid.