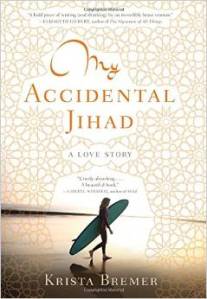 I have no idea how this book wound up in my bookshop. It’s an Advance Reading Copy (known in the biz as an ARC) and those are only distributed publishing festivals, or by mail to bookstores (but not usually used book stores). But there it sat on a table, waiting to be shelved, and I picked it up…

…and devoured it in two sittings.

Bremer writes like a journalist poet. She always has the right word, her writing economic with the confidence of a vast vocabulary. But what she’s writing about is intensely personal: marriage to a man whose background is so different from her own, she knows they don’t have a “storybook marriage,” just “their story.”

What sucked me in is something my agent and editor have warned me against time and again: description and analysis are all very well, but people want a story with a beginning, a middle, and an end.  My Accidental Jihad is not a story, but a snapshot leaping back and forth between time, dripping descriptive analysis in depth. It has a beginning, but it doesn’t have a middle or an ending.

Which bothered me not one whit. I admired the way Bremer described things that are hard to admit exist, let alone look at squarely with intent to analyze. Courage and lyrical writing aren’t things I always put together, but rather than blunt, she’s finessed.

Bremer and her husband live in North Carolina, in a progressive city that still doesn’t know quite how to react when she shops Whole Foods with her 10-year-old olive-skinned daughter, who chooses to wear a head scarf. When Qaddafi dies at the hands of his people, the family watches it on television in a mall restaurant. Bremer’s one visit to Libya, to see Isamel’s old home place, is a disaster tinged with love.

I love culture clash books anyway, but what intrigues me about this one is that it drills down to attitudes rather than surface living: aging in American culture is in poor taste; poverty is a moral failing; she isn’t materialistic, but Christmas just needs to be the way it is. There are some very funny “ouch” moments in this middle-class expose-memoir.

Not that this is an “all praise to diversity” book; in fact, she deals with diversity with the same ruthless boring down to the core that she uses on issues of women’s beauty and bodies. And she turns the same analytical eye on husband’s way of handling the world as she uses on hers. Her description of him bartering for a wedding ring will stick with you.

In the same way that it is not a story, Jihad is also not a summational inspirational catechism of life lessons learned. Ironically, Bremer’s authoritative use of language describes a lifelong situation of not knowing what to think. A chapter entitled “Rage” describes her husband telling his relatives that she hates Libya–while they’re in it, being feted as house guests. The story doesn’t end in resolution, but in her saying “Fuck you” in a car full of people who speak English, with her Libyan sister-in-law taking her hand in solidarity.

The last two pages might dip into platitude-ism, but I sympathize with trying to sum up a painting still in progress.

I really enjoyed this memoir.

2 responses to “The Monday Book: ACCIDENTAL JIHAD by Krista Bremer”