It was a triple play weekend here at the Little Bookstore. Friday night we had an excellent and well attended house-concert with Michael Reno Harrell, whose stories and songs were absolutely first class.You can see a video of him on our bookstore facebook page Tales of the Lonesome Pine LLC. 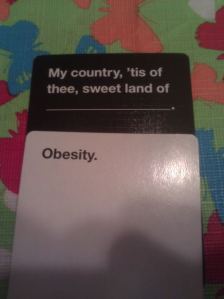 Then on Saturday night we had our bi-monthly ‘Cards against Humanity’ game night, also well attended and as hilarious as ever. The play of the night came when, using a blank card, Wendy asked “How did Susan persuade David to take in their latest adopted cat?” Several cards appeared–including the one no one would admit playing, “That Ass,”–but the winning card was “Abstinence.”

I had no idea Susan’s face could turn as red as her hair.

And then Sunday night was an event that I set up: a special movie night featuring ‘Monty Python and the Holy Grail’, preceded by a documentary with Terry Jones and Michael Palin visiting the Scottish castles they used in the film. I aimed it at local folk who had been on my annual Scottish tour (and had, therefore seen at least one of the castles). That was another good night with lots of laughs and a lovely feel of reunion among those who’ve gone to Scotland with me.

This weekend Wendy and I emcee the Sycamore Shoals Celtic Festival in Elizabethton (TN). And then at the end of the month, our own Big Stone Celtic festival is upon us here in town!

And, just as I thought I was finished writing this, a couple arrived all the way from Nashville who had read Wendy’s book, used to own a bookstore, and are now planning to do it again. At the same time, the mailman delivered a lovely thank-you card from the 17 members of a Johnson City book club who visited us a couple of weeks ago (and ate lunch in our cafe).

Just in case this sounds too idyllic, our old and rickety building still tests my less than professional carpentry and plumbing skills. I loathe and detest sink drains and stairs, but that’s what I’m doing between bouts of nerves over the upcoming Big Stone Celtic.

So – just another typical week. If it’s Wednesday, it must be time to check on our international superstar coming from Scotland. And then I’ll tighten the u-joint in the bathroom. Hey ho…..