Jack was Up Late Last Night: everything you wanted to know about Scottish politics but were afraid to ask….

In honor of the election held in the United Kingdom yesterday, Jack brings you this historic guest post….. 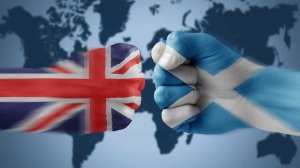 There was an election yesterday in the UK (The United Kingdom – not the University of Kentucky) and many of our American friends have been asking me about it.

Although some eight parties ran, the UK parliamentary voting system pretty much ensures that elections are a ‘two horse race’. Either the Conservative Party or the Labour Party gets a majority; think Republicans and Democrats. All the seats are up for grabs; it’s as if we vote for all the state governors and the president at the same time, for a term of five years.

Scotland has 59 seats out of about 650 and historically most have gone to the Labour Party. In the early hours of this morning, however, everything changed. The Scottish National Party went from 6 seats to 56, while the Labour and Conservative parties ended up with one each, along with one for the small Liberal Democrat Party. Poor lonely souls; ♪ three is the loneliest number. ♪

Now remember, the United Kingdom is three small countries (Wales, Scotland and N. Ireland) joined at the hip to one big country: England. And England/Wales voted Conservative; if you think Scotland has it bad, Wales is actually counted as part of England even though it’s a separate country. Don’t ask; it’s confusing to those who live there too.

That forces two distinct and diametrically opposed political cultures to try and work together, the right wing Conservatives in England with most of the power plus the ability to always out-vote the Scottish members, while Scotland’s left-leaning SNP have little power at all–except the ability to call for a vote on Scottish Independence.

It’s obvious to everyone where a relationship that fraught that will lead…..

Last September there was a narrowly-defeated vote on Independence for Scotland. Pundits claim, and word of mouth also suggests, that the biggest reason for Scottish voters deciding to stay in the UK was a last minute promise by the party with the most Scottish seats then (Labour) of much more power for the Scottish Parliament. Which they pretty much ignored after Scotland voted to stay.

Yesterday, Scottish voters held Labour accountable for that; one pundit called it an “electoral firing squad.” So the result of yesterday’s election will, in my opinion and that of many political commentators, inevitably lead to another vote on Independence within five years. This makes me happy. And while I’ve never been a gambler, I’d put money on it passing this time!

One response to “Jack was Up Late Last Night: everything you wanted to know about Scottish politics but were afraid to ask….”