Ground Control to Everyone

I’m Major Tom (left) and that’s my brother David Bowie. We were dumped behind a store in Wise at about nine weeks old.  We’re named after David Bowie ’cause we were rescued the same day he died. He was an animal lover, so we wanna sing you one of his songs–not the one we’re named for, though.

Last year, despite the best efforts of about a dozen cat rescuers, 477 cats got killed in the Wise County Shelter. Along with 87 dogs. How many are gonna get it this year? Me and my brother won’t be among them ’cause we got rescued, but it’s gonna take more than a dozen people to make that number smaller. 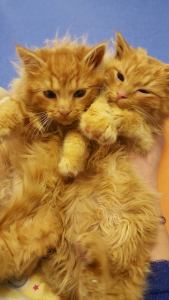 Love is the opening door
Love is what we came here for
No-one can offer you more
You know what I mean
Have your eyes really seen?

Love is the key we must turn
Truth is the flame we must learn
Freedom the lesson we must learn
Do you know what I mean?
Have your eyes really seen?

Four hundred and seventy-seven cats is a lot. Can you help? Foster. Adopt. Get your family pet fixed. Don’t take unwanted cats to the shelter; get them fixed and adopted. Pay to spay someone else’s cat. Share photos. Say a prayer. And let’s see what we can do together.

One response to “Ground Control to Everyone”