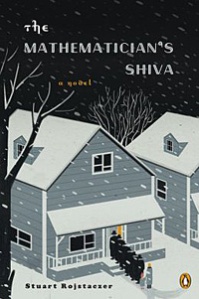 So if David Lodge were Jewish….

This is a comedy of errors and misfits that isn’t all that funny, but it runs through so many kinds of worlds in its multi-layered unfunniness that sometimes it is. It’s not the way he writes the book but what he writes about that kept me going. On one level it’s about a guy who doesn’t really like his mother although he’s required to love AND admire her because she’s a brilliant mathematician. On another level it’s about what humans want (yes, that broad) and what it means to be in survival mode versus conquer mode. And on another level it’s just plain mean fun about math geeks.

It wasn’t a “can’t put it down” but it was an enjoyable bedtime read. The characters are well-drawn, and we all know I’m a sucker for those. If some of the humorous antics were predictable, well, it was still funny.

The plot premise is that Rachela, the mom who dies at the beginning of the book, has solved an unsolvable math problem, but hidden her papers out of pique. Enter Three Academic Stooges trying to pry up her floorboards.

This isn’t so much dark humor as grey, and if you like math, it’s a bit weak in that department. But if you like comedies of human errors and foibles, it’s fun.

2 thoughts on “The Monday Book: The Mathematician’s Shiva by Stuart Rojstaczer”