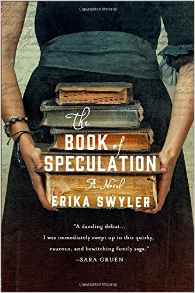 This book came into the bookstore, and its cover attracted me. (Yes, I know about that saying you can’t judge a book by its cover; it’s a lie. People go to special marketing schools just so you can.)

I’m not the biggest fan of surprise endings – let’s start with the ending, shall we – but this one had a great twist. I’m also not a big fan of time-hopping books, but this one moved between the eighteenth and twenty-first century with some smooth maneuvers.

I am a big fan of well-developed characters, which this book has in spades. Even the minor players get major development.

The basic plot is some families have been hanging around each other for a few centuries, working the carnival circuit, and some of them keep dying the same way. It all comes down to a very old curse, some very new secrets revealed, and a cast of quirky misfits.

I’d call this something between a mystery and a family saga. It’s too gentle for a thriller (Gott sei dank) and too mysterious for general fiction. Now might be a good time to say, if you’re afraid of water, you won’t like this book. I’m a certified lifeguard, and parts of it made me queasy. (Also, let me just say now, don’t try any of that stuff at the lake.)

The writing doesn’t get in the way of the story; this is character-driven well-plotted book that would be enjoyable anywhere, except the beach. Trust me; don’t read it at the beach. Your bathtub is safe.

Two hands up, waving not drowning.