Losing it at Minuteman

This morning Jack and I went to the Minuteman Missile Site, where I distinguished myself by bursting into tears. Here’s a photo tour.

there’s a video from the missileers (the people who staffed the silos and would have turned the keys) talking about what it was like to be there. Here’s a poem one wrote and posted in his locker. 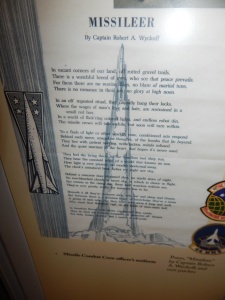 The interesting thing about this chair is, no one old enough to understand it would sit in it. Little kids were hopping in and out, but adults were reading the exhibit, leaning against the back of it, and swallowing hard.

the unofficial motto of the missileers 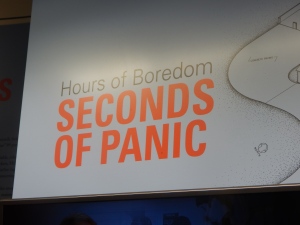 the museum moved from there to the naivete of the early atomic tests and what people thought an atomic blast did and didn’t do, and the origins of the Cold War…. 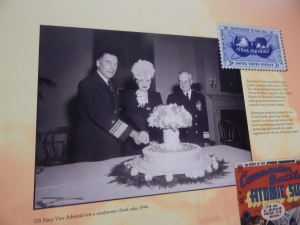 … which had a lot to do with the division of Berlin, of course…

…and which wasn’t all bad from everybody’s point of view. Full marks to the museum for bringing in some international perspective.

I didn’t know about this guy, who is truly an unsung hero.

but the exhibit that got to me the most, before the visitor’s book that  invited comments, was the museum’s interpretation of the Kruschev speech “We will bury you.”  The descriptive panel said Americans interpreted Kruschev as meaning they would push the button, when what he had meant was Communism would overtake Capitalism. And how useful that was for funding the Cold War’s stockpiling and everything that came with it. It made me think how that isn’t so different from now, when fear drives so much of how we view ourselves and the world, except instead of Communist it’s Muslim. Or any other villain du jour.  History recycles. Unfortunately, it doesn’t seem to be upcycling, just spiraling into repeating itself. When did we become so easy to manipulate?

And then I got to the end and read this in the book where visitors were invited to leave comments, and burst into tears. Jack had to hold my hand and take me out of the museum.

Tomorrow I will post pictures of the multiple adorable creatures we saw. 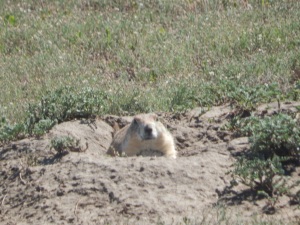 One response to “Losing it at Minuteman”