Where it Hurts and where it Heals 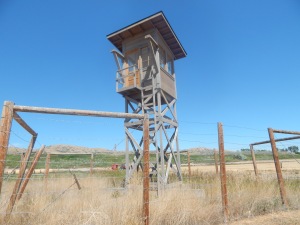 The place where I made Jack sleep in a tent was about a mile and a half from a Japanese internment camp from World War II. Lightly advertised, the place, and if Rod our Air B&B host hadn’t said something about what it was, we might have misunderstood and dismissed the Heart Mountain Historic Site sign.

But he did, and we went. We are used to touring painful places in American history. We went to the Minuteman Missile site. I’ve backpacked through Dresden. Jack went to Vietnam. We get that the “never again” resolve coincides with tourism and there’s something a little too soothing, too white privilege in the mix. Sometimes I think that George Satanyana guy got it wrong. History doesn’t repeat itself when it’s forgotten, but when it’s spun into information overload that numbs and soothes. If you see it enough, you become inured.

photography was at first forbidden in the camp, but as the time stretched, the regulation went lax. Which is why some of what happened and how it looked is now documented. Fear the camera, fear the journalist. Good.

I don’t do politics publicly, so I’m only going to say that reading the information, written by people who were in the camp, was surreal in today’s American political climate of economic fear hidden behind anything we can think of to hide it behind. Creepy is a childish word. The edge of terror? Sick to the stomach? Too much drama. Surreal will have to do.

After we toured the Camp, we drove on to the Medicine Wheel in the pass off Highway 14a. The Medicine Wheel is still used, and  several signs at the beginning of the mile-and-a-half hike to it said, in essence, if someone of indigenous heritage is using the site, you’re going to wait, respectfully, without taking pictures. Accept this before you walk up there, because some of the prayers and ceremonies may take awhile. 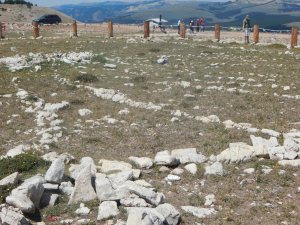 No one was, so we walked widdershins around the circle, looking at objects left.

One place where the world hurts, one where it heals. Neither about white people like me. Except maybe that white people could have stopped one, and can honor the other. “The Courts Failed Us” interpretive sign was one of the most moving at the Camp. Another was the unexpected Dr. Seuss cartoon, anti-Japanese people. And how very reminiscent it is of certain attitudes in America today. At another site we visited more than a week ago, the Laura Ingalls Wilder birthplace, I remembered “Ma” and her favorite saying “A body makes its own luck.” Do we make our own enemies? Or was that Pogo the cartoon possum comic strip right: the enemy is us. 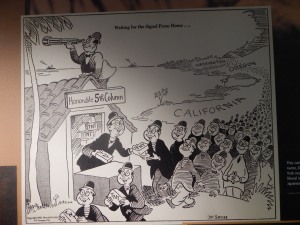 Theodore Geisel’s unexpected contribution to the cause 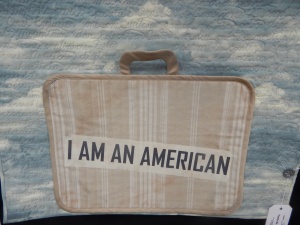 One of several artworks on display in the textile storytelling exhibit, from local women who created story quilts based on the camp. All were from Wyoming. None of the camp residents were allowed to remain in Wyoming after the camp closed. Adults were given $25 (equals $330ish today) and a bus or train ticket to the destination of their choosing. Some went back to LA or the Pacific Northwest, where they found their stored items stolen or vandalized. Many went East for work.

There was one white woman at Heart Mountain, Estelle. She was married to a man who had to report to the camp. Estelle made $19 per day sketching scenes for newspapers. After the camp closed the sketches that didn’t make the newspapers began to circulate. 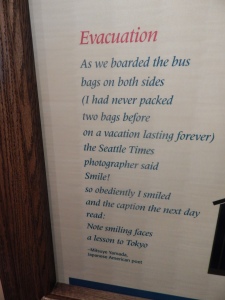 The question of the century 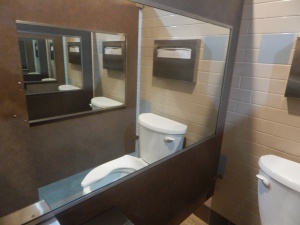 One of the stalls in the ladies’ bathroom was fitted with mirrors and a warning sign. It said this stall was set up so you could see what the camp bathrooms were like – the toilets and showers had no doors. Communal or not at all.

One of the things the museum makes clear is that the Japanese Americans ordered to report were confused, angry, yet compliant. Among all the weird things – including that at least one person was shot and killed at Heart Mountain for getting too close to the barbed wire fence, and some children were arrested when their homemade sled went past it on a back road – were that boys who turned 18 in the camp were required to register for the draft. Some went into the Armed Forces. 68 refused unless granted their freedom first, and they went to federal prison for 3 years.

The camp organized things for the kids to do because family life was chaotic, family units not eating together in the mess halls, children running about bored getting into mischief. Community leaders set up Boy and Girl Scout troups, and every day the Boy Scouts raised and lowered the flag in the camp where they were held prisoner by order of the American government.

There were many prayers at the Medicine Wheel. I’m not a fey person, but you could feel some of them capturing bad, some of them releasing good. We’re all praying for something.

8 responses to “Where it Hurts and where it Heals”