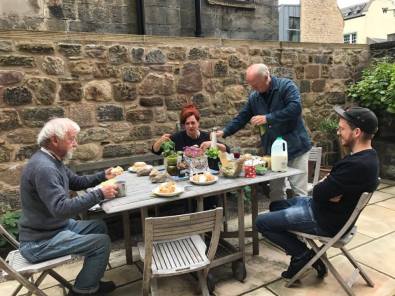 In the city, space is a commodity. I’ve always thought of cities as incongruous lonely spaces – so many people, so little humanity interacting.

But we are staying with friends in downtown Edinburgh, not a mile off Princes Street (downtown) and they have a walled garden…..

I love walled gardens. Your own little bit of marked off territory for just sitting, thinking, being quiet and contemplative with a book and a cup of tea, or loud and boisterous with instruments and a bottle of wine and a handful of mates.

In the middle of the city, you can find the greenery and the fountains and the people who actually live in the cities, whose lives are rooted like the gardens they plant in their little secret places.

Perhaps my fondness for gardens stems back to the day after Jack’s mum died, and I was away from home in Ayrshire, in Wigtown, Scotland’s book city, and had nowhere to go to be by myself and have a good cry. And I spilled my guts to say as much to one of the bookshop owners, at Ceridwin’s Cauldron, and she took me back to her garden and brought me tea and told me to stay as long as I wanted. I spent an hour back there composing myself and being nothing but alone. Ever since then, walled gardens have been a special space.

The garden here at Barbara and Oliver’s has been a jolly place, shared for music and reminiscences and politics and the mystery of the noise coming from somewhere nearby. (Jack cracked that; it was a two-note sound not unlike the CLOSE ENCOUNTERS alien five-note theme, and he found the sewer pipe in the apartment next door was letting off gas, one note opening, the other closing. A farting building, in essence.)

Walled gardens are lovely, and every city has such little tucked-away spaces. Explore them when you can, with friends when you can. They are the heartbeat of humanity.