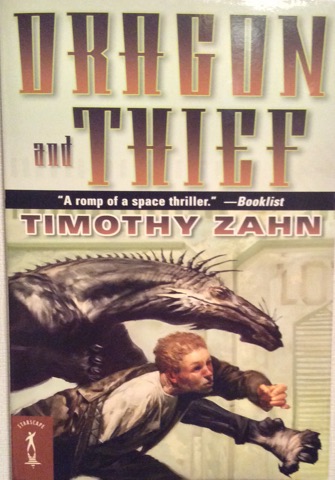 Hiding out on the uninhabited planet of Iota Klestis, Jack and his Uncle Virgil are witnesses to an aerial battle in the sky above their concealed spaceship. As they watch, four little ships are firing on four large and lumbering spaceships. At the end of the short and deadly battle, one of the large ships has crashed on their hideaway planet. Uncle Virge urges Jack to go search for survivors or anything else worth salvaging.

This is when the story gets interesting. Jack comes face-to-face, or should I say, back-to-front, with an alien K’da dragon warrior named Draycos, who is like nothing that Jack has ever experienced before. Draycos changes from a three-dimensional dragon to a two-dimensional form that flows onto Jack’s body, and transforms himself into a living tattoo that wraps itself across Jack’s back, shoulders and arms.

Needless to say, Jack is freaked out! This book will keep you fully engaged in the adventures that Jack and Draycos encounter, while continuing to establish their relationship as host and symbiont. Draycos also teaches Jack about ethical behavior, as befitting a K’da dragon warrior.

This book is the first of six books in the Dragonback series, written by none other than Timothy Zahn, who is well known as the author of eighteen science fiction novels, among those two Star Wars© series.

I stumbled across this book (written for young adults aged 10+) at my local “used books” bookstore. Intrigued, I stood there reading it for a good 30 minutes, before finally putting it down; but not before I had taken a quick photo of the cover. A year later, I went back to find it. I had been so impressed by the creativity of the author that I just HAD to finish reading it! It’s a good 2-hour read from start to finish. You will enjoy it – if you are looking for the feeling of having finished something light and satisfying, when you turn the last page.