Jack is in Scotland and Wendy is – – somewhere – – so Jack sent this by carrier pigeon.

Back more than twenty five years ago I helped my folksinger friend Ed Miller with his then new music tour of Scotland. Ed lives in Austin, Texas and started bringing over thirty five fans, touring them around Scotland and having them joined each day by a local musician with particular knowledge of the local history and culture. I performed that function when they were in Fife each year. That finished when Wendy and I moved to the US, but it gave me the idea for my annual small group tours.

On Ed’s tours he always worked with a tour guide called Charlie Hunter, who dressed in his kilt, herded his charges off and on the coach in a timely manner.

Imagine my surprise when my tour was in Melrose on the second day of our tour and I saw a familiar kilted figure standing beside a large coach parked next to our minivan. 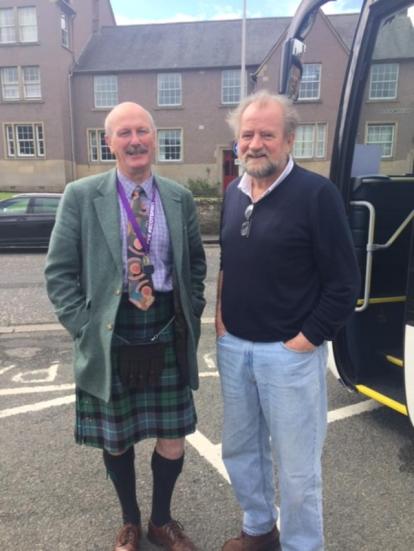 As we exchanged greetings Ed appeared as well!

Thinking that this was a ‘one off’ coincidence we bade them farewell and continued on our way. A few days later we pulled into the parking lot behind the ‘Green Welly’ at Tyndrum and who should be there as well – – -! Much joking and then another farewell. We set off for Glencoe and, as usual pulled into the visitors’ center. An hour later so did Ed and Charlie in their now familiar coach! Once again it was farewell and we headed for Oban and the ferry to Mull.

The following day we headed down through beautiful Mull to the Iona ferry and I waited with our minivan while the rest of our group went across on the foot ferry. I eventually wandered up the line of parked coaches and saw a now very familiar one! It turned that they would be staying in the hotel next to ours in Oban that night, so the following morning we once again bade them farewell – only to meet them again at the Green Welly! With them for a couple of days was another old friend – Margaret Bennett! 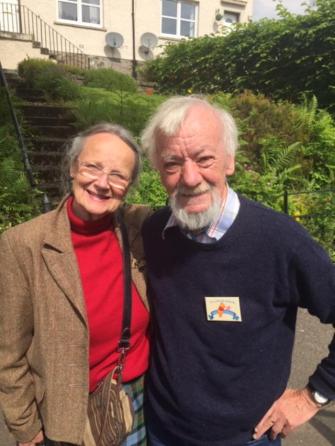 Our next stop was at Killin at the start of Loch Tay on our way to see Europe’s oldest living tree at Fortingall. As I guarded our minivan at Killin a very familiar coach pulled up – – –

The Iona ferry on a beautiful day!