Our riding mower lived in the garage when we first moved to these nice new digs. But it was very awkward getting it from there into the backyard where it was most needed. So it’s been sitting out with a tarp over it to protect it from the rain. That isn’t ideal so we decided to get a storage shed to house it.

We decided on a DIY smallish shed made from heavy duty plastic, mainly because it came with a floor. When I checked the parts, the floor turned out to be thin and really just for positioning the walls correctly. So it was back to Lowes for lumber to make a base!

I should remind everyone that for a number of years I was Head of the construction department in my old college in Scotland. But if my friend and colleague Davy Spence who led the carpentry and joinery section had seen my workmanship on that base he would have shaken his head (my trade was painting and decorating).

Nothing daunted I set too constructing the shed with help from Wendy.

We’ve been married for twenty-one years and have rarely fallen out over anything, but this might easily have ended in divorce. I needed Wendy to hold pieces and slide them around on command. They were meant to slip easily into place.

Easily is a relative term…..

The trouble mainly stemmed from my fairly flexible (not to say, shoogley) base. That meant that none of the wall sections ended up exactly fitting as they should have. After a couple of false starts, and me accidentally letting a panel fly back and smack my beloved in the face (no swelling remains) we got them all up and connected together.

Next came the roof which was in four sections and also involved a fair amount of pulling, pushing and application of ‘Ferguson’ (a make of hammer favored by car mechanics). It wasn’t until the final roof section went into place with a satisfying click that the whole structure stopped wobbling. Including Wendy’s faith in me, since I had spent the last hour shouting things like “Up! Down! Left! More left!” as she stood outside on a ladder holding roof bits. 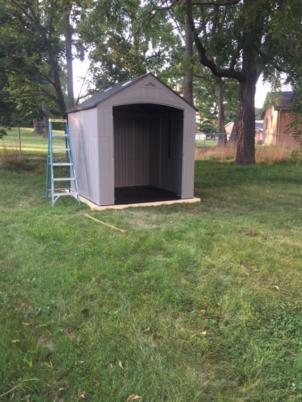 The online reviews for this shed include a number from folk who said they put it up alone and others who said that two of them did it in four hours – I don’t believe them!

For anyone who’s interested it’s a Craftsman 7×7 storage shed. You might want to take your spouse to dinner first if you’re going to build it together.