A Tale of Tails

Jack fails to make the deadline yet again – tsk, tsk!

We currently have five of them and most are FELV positive (which means that they could either live a long normal life – or not). 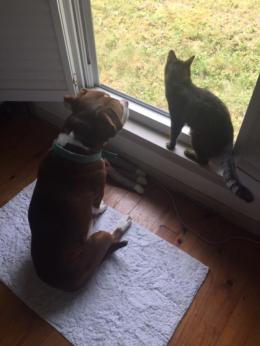 Tooth arrived over our backyard fence when we were away in Scotland a few years ago. Named because she was a feral kitten that looked like a smaller version of another feral cat we fostered and named Fang, Tooth became the friendliest cat imaginable. She took on the job of looking after our aging lab Zora and then, after Zora died, she took on the same role with our terrier Bert.

After Bert passed poor Tooth hasn’t had much to do, so she was delighted when we got our new dog, Bruce. Luckily big bulldog Bruce is very used to cats and lets them all play around him perfectly happily.

Bruce is undergoing treatment for heart-worm and probably gives off some kind of ‘sickly’ vibes, because Tooth has gone back into full nursing mode. When he started limping on Sunday Tooth would have fetched a crutch!

As for the others –

Kira likes to intimidate everyone and everything. But she loves a shoulder scratch from me!

Molly likes to stay away from Kira – mostly either on top of cupboards or outside for a week.

Hannah is everyone’s buddy and isn’t afraid of Kira.

Lorelei is the newbie – just arrived and getting the lie of the land. Particularly ‘cute’!

One response to “A Tale of Tails”