A few weeks ago, I blogged about house painters and decorators and briefly mentioned my dad. 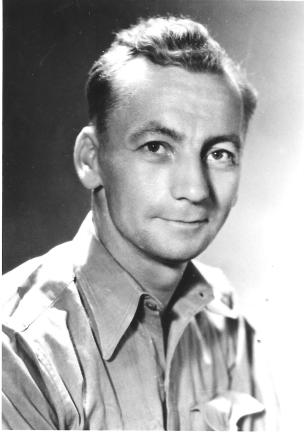 Early in the RAF.

So, here’s a fuller story about him as an artist-craftsman –

William Beck (usually known as Bill or Willy) was born in Govan, in Glasgow, Scotland, the son of a ship’s painter. Govan was the center of Shipbuilding on the Clyde and the Clyde was the center of shipbuilding in the world then. Painting ships was fairly rough industrial painting, but Bill was destined for much higher-class stuff.

He moved to Fife at a fairly young age and entered apprenticeship as a decorative painter. In these days (the early 1900s) an apprenticeship lasted at least seven years. Once he’d finished his time he was employed by Henry Hoggan and Son, the most prestigious and high class painting and decorating company in Dunfermline. He quickly progressed to be their expert in interior design – color coordination, mural drawing, Church decoration, marbling, wood-graining, sign-lettering etc, etc – – –

His training had included time at Edinburgh art college where he’d studied color theory, Greek and Roman design, calligraphy, water color painting and much more. A true renaissance man and a student of the marriage between art and craft!

When WW2 came along he volunteered for the RAF and spent most of the war in Egypt where his skills were employed painting the identification numbers and letters on planes and lettering maps.

After demobilization he set up a decorating business in partnership with another ex-employee of Hoggan’s – Tom Anderson. Tom was the expert in painting and wallpapering, while Bill was the artistic one.

During all this time and even while he was in Egypt he was doing excellent water color paintings – mostly portraits but later on a good many landscapes too.

Around the time that I left school and started my apprenticeship, Tom Anderson retired and Bill continued as the sole partner. In these days before DIY took hold around half the work was in private houses and half was contracts to paint government offices, hospitals and schools. The firm usually employed around five or six time-served craftsmen and two or three apprentices (of which I was one). Because the work ranged from ‘high end’ domestic to fairly basic industrial my apprenticeship gave me a good grounding. Bill built up a successful sideline in lettering shop signs and vehicle lettering and often took me along, so that added another string to my bow.

He continued to work very actively right up until he retired and I remember many occasions when he clambered up a ladder and over roofs while the rest of us looked on in amazement.

One of his proudest moments, though, was after I started teaching painting and decorating in the local college. He had always wanted to do that but had never had the opportunity, so I brought him in as a guest to demonstrate his marbling and wood graining skills. By that time he was quite sick, but he put on a great display to an appreciative audience (and boosted my reputation no end!).

In the last few years of his life he kept himself occupied by continuing to paint water colors and did all his own mounting and framing. We’re delighted to have a number hanging on our walls!