Long before Wendy and the bookstore ensnared my heart, I was a professional house-painter—from apprentice to master in just twenty long years. I know that when one is properly trained and experienced one knows how to do things easily and correctly. Those who continue to practice their craft keep good skills honed.

I’m an excellent painter. But joiner, plumber, electrician, plasterer? What, is that water or electricity running thru yon pipes? As I continue with the saga of the bookstore basement remodeling I’m struck by the knowledge that I’ve been trespassing in places experienced angels fear to tread.

Did I mention that I was such a good housepainter, I was invited to teach my craft in the local college and then became Head of the Construction Trades Department? In that capacity I regularly observed colleagues teaching all the crafts listed above. I valued their expertise.  I even picked up some tips.

And as the basement work continues I find myself being either incredibly lucky or having to do things three times – once completely wrongly, once the right way, but badly – and finally more or less acceptably.

It would be too easy to blame the idiosyncrasies of a 1903 house, its settling over the years and the work of the DPOs (see my previous blog post) for all my frustrations and miss-steps as I re-measure and re-do, but the reality is that I’m an amateur.

Which reminds me of a joke. An old friend worked as an “armature winder.” The armature is the wiring that winds ‘round parts of motors; rewinding them is a highly skilled job. But given its pronunciation, his standard comment was that he would eventually be a professional. And people who didn’t know what he did would smile and say, “Well good for you, keep learning!”

So I salute the real joiners, plumbers, and electricians in our small community, I thank the ones who have kept me from drowning, frying, and dropping large beams on my head. And if you need your house painted, call someone else.

Today, Jack and Wendy gallivanted off to sign books, visit bookstores, and see old friends in Philly, NYC, and Charlotte, leaving Shopsitter Andrew Whalen to sort it all out and bravely captain the ship o’ books and its furry, mew-tinous crew.

During my first week in Big Stone Gap I was taught a great deal about operating a small business. There’s accounting, stocking, inventory management, and that cornerstone of every great business: bribing animals with treats so they don’t bark at customers or claw your eyeballs.

But some policies at Tales of the Lonesome Pine are different from your standard multinational mega-conglomerate next door. For one, the training videos are better. The dress code is more lax too, unless slippers are company issue and I didn’t get the memo. (C’mon Wendy! All pajama-related memos are supposed to be delivered in triplicate!)

Perhaps most bewildering for me is the total lack of a customer script. At first I copied some of Jack’s mannerisms. The first time he heard me say, “Hi! Looking for anything special, or just in for a browse?” he gave me a look that would frost every field in Scotland. “That’s my line!” he said, covering his murderous intent in completely convincing joviality. I’ve since learned, through empirical research, that people will listen to a man with a Scottish accent more than a person with a vague Midwestern accent who mispronounces pillow as pellow and milk as melk. Not sure why — further research is required — but initial results lead me to believe it has something to do with a Scottish brogue being (and this is a scientific term here) ADORABLE. With this knowledge in hand, I now know I can’t just copy Jack’s patter, unless eyes glazing over as I ramble somehow contributes to customer satisfaction.

Also, I never saw the Org Chart that lays out the official job titles for the menagerie. Is Bert Head of Security, or Public Relations? Mix those two up and you have a serious problem on your hands. (I’ve since looked this up and found on the blog that Bert is security. I probably shouldn’t have let him write all those press releases.) Owen has been a constant companion, but we’ve had some tussles over chain of command. I’ve since been testing him out in different capacities. Assigning him accounting was probably my biggest mistake. 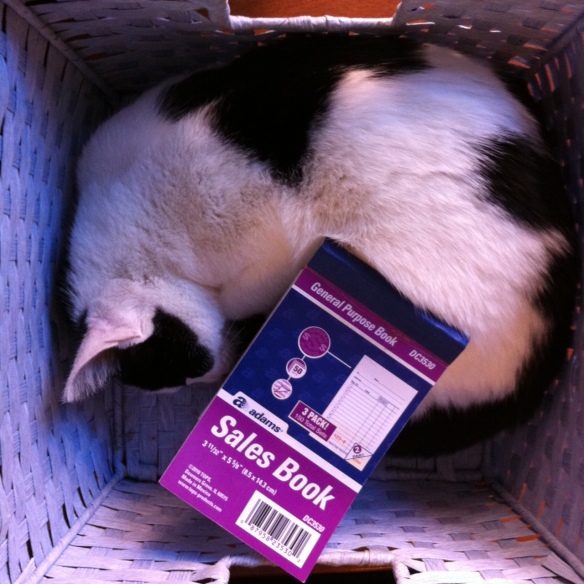 So, while there’s been some hiccups along the way, my on-the-job training is progressing. But I won’t know for sure how I’m doing until CEO Val-Kyttie’s performance review.