The Monday Book: PRAYERS FROM THE ARK

Rumer Godden is the kind of author that makes people say, “Who?” And you say “Black Narcissus, you know, the film?” And they say, “Oh, did he write more than that one movie?”

Let’s start there. She was a woman. She was the incredibly prolific and talented writer of more than sixty books for children and adults, fiction and non. And she had this thing about nuns, and growing up in India; both of these feature prominently in her work. Check out The Greengage Summer, or Kingfishers Catch Fire.

Prayers from the Ark is one of my favorite books, both by Rumer Godden, and from life’s big eternal library of humanity. It’s actually a translation Godden made of a French collection of poems by Carmen Bernos De Gasztold. This is one of those occasions when the story behind the book is as fascinating as the book itself.

Godden went on a lot of writing retreats, several to a Benedictine Abbey in France. If you want to see where she was, click http://www.abbaye-limon-vauhallan.com

At one of these retreats, while helping the nuns clean–because nothing clears the brain for writing like bottoming out a closet–she found a small, locally-produced book of poems. Charmed after reading the collection, Godden discovered that the poet had lived in the Abbey as a patient (after a mental and physical breakdown) and written the book during the Occupation years of the 1940s. The nuns had encouraged De Gasztold to write as part of her treatment.

Godden sought out the author and worked with Carmen to produce two translated books from her poems: Prayers from the Ark (published in English in 1963) and The Creatures’ Choir (1965).

I love, love, love Prayers from the Ark as much as I love the story of how it came into being. Some of the poems are cynical – the pig, for instance, talking of how hard it is to be grateful when your ultimate goal in life is to be bacon. And some are so sweet. The donkey asks God to please “let me find my little brother of the manger once more.” And the rooster, although grateful for God’s many blessings, wants the Deity to remember that “It is I who make the sun rise.” 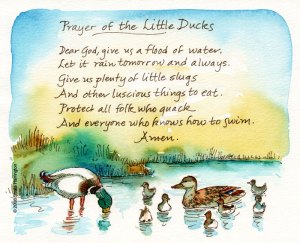 Godden spoke of the difficulties of translating the poems: “The economy of words, the subtle play on the double meaning on some of them, the integral rhythm, have been almost impossible to catch…”

Impossible to catch, they may have been, but they caught on quickly, selling out the first American print run within a week. Ivor Davies, a Welsh musician, later set the English translations to music. Call me a plebeian, but I never could get into those performances; such dramatic music over top of that simplicity and sweetness negated the joy for me.

In print, quiet and on the page, they’re brilliant. They’re lovely. They’re thought-provoking. The book has been reprinted again and again. Read it. You’ll see.

The Prayer of the Cat

Lord,
I am the cat.
It is not exactly that I have something to ask of You!
No–
I ask nothing of anyone–
but,
if You have by some chance in some celestial barn,
a little white mouse,
or a saucer of milk,
I know someone who would relish them.
Wouldn’t you like someday
to put a curse on the whole race of dogs?
If so I should say,
Amen.