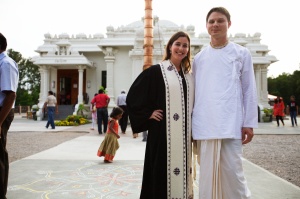 Dana and I made Twitter-friends (is that a noun?) a couple of weeks before the Movable Feast of Authors run by Bookmarks, a very active lit-lovers group in North Carolina. The Feast entailed twenty tables of eight people, with authors moving in ten-minute intervals between them–a wild ride covered with online publicity, so Dana and I were in a lot of tweets together. One day I clicked on her icon and found her book was about being an ordained Baptist minister married to a Hindu who used to be a monk.

Dana and I got a chance to chat after the event, and we traded books. (Don’t tell our publishers, ‘kay? Thanks.) She and Fred had gone on bookstore dates, and I’m fascinated by interfaith connections, so it seemed pretty natural.

More natural than the eHarmony match Dana and Fred made. Her book is less about external pressures put on them by others than personal expectations and changes. That’s what I liked most about her writing. Dana left a lot of space for others to interpret or extrapolate, by holding her narrative to “This is what happened to us; this is what I learned; this is how I understand the contentious points.” Saffron Cross is an honest description of a wife reconciling her full-on belief in Jesus with her husband’s full-on devotion to Krishna.

Early in the marriage, they decided they couldn’t take an easy road and worship separately as each saw fit; they had to share seeking God as a foundation for their shared lives. That made for some very interesting theological points not easy to reduce in a review. If I say that Dana and Fred set up a Hindu-tradition altar in their homes and included Jesus and the Bible in its objects, you might get the idea that this was an easy compromise, rather than a parsed-apart and carefully considered decision about how the two faiths work. You might think about hair-splitting, mental gymnastics, and semantic end runs around scripture.

And that would be the wrong idea, because nothing comes easy in this pragmatic narrative. Back when Sue Monk Kidd wrote about her rejection of male-centered religion, my friends and I who read her memoir were frustrated. She avoided the central question: What about Jesus? If a guy says “I’m the son of God” and you relegate him to “I’m a son of God,” then you’re worshiping someone who belongs in a lunatic asylum. If Jesus isn’t God’s son, he’s a nut case. The “all religions lead to the real God” approach is facile if the only way to make that happen is reducing Jesus’ status.

Dana and Fred don’t take that route; she addresses both anecdotally and in theological observation that she believes Jesus is God’s son. Her meshing this with Fred’s approach, finding peace that they’re both on honest paths, proves less semantic than thought-provoking.

If you’re interested in Christianity because you are a Christian; if you’re anthropologically interested in faith communities; if you’re a Hindu frustrated with Western materialism; if you find marriage stories voyeuristically interesting; or if you like the idea of a woman Baptist hospice minister, you’ll find Saffron Cross a densely packed book that keeps you up late.

And I admit to giggling, thinking of how hard it was explaining Little Bookstore in ten minutes to eight strangers, and there’s Dana sitting down to her tables: “Hi, I’m a Southern Baptist married to this nice Hindu guy…” Oh, to be a fly on the wall.