Jack guest blogs today on the end of an era, and the Monday book will return next Monday.

She came to us as a tiny kitten, just four weeks old. One of her earliest acts was exploring the backyard in Rosyth, Scotland, where she saw off a big bruiser of a cat six times her size. (He’d had the audacity to use the yard as a shortcut to the field beyond.) “Now would be a good time to be magnanimous,” I shouted as the confused older cat hunkered down to watch Valkyttie–all of six inches long–arch her back and hiss like a little black powder puff. But she held her ground and established her territory.

We should have known then what we were in for. Every day Valkyttie had a fish finger for supper while we ate ours. This kept her from climbing our legs to dive headfirst into our plates.

Later she tried to teach me how to catch mice. When I failed after two or three tries, she went off and returned with a moth, mieowing, “Perhaps you should start with something simpler”?

I knew she’d brought the moth to me because Valkyttie had epicurean tastes and wouldn’t have been caught dead with such a vile supper for herself. Once she jumped onto the table, speared a curried shrimp from my plate, and flicked it over her shoulder. The thing did a perfect splashdown into my glass of white wine. She then fished it out and ate it. I expressed astonishment at her “lucky throw” and she gave me That Look and did exactly the same thing again. Her mieow said, “You should know I prefer my curried shrimp lightly marinated!” 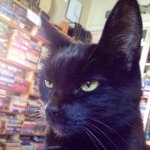 Valkyttie shifted house with us twice. Not content with emigrating from Scotland to England, she persuaded us that we needed to move to America, as she had heard the weather was warmer there. Her final move was to Big Stone Gap, where she oversaw the setting up of our bookstore – first inspecting the building of bookshelves, then supervising the displays of books. Thus established as the bookstore CEO, she quickly assigned ‘greeter’ duties to her arch-nemesis cat Beulah, and then recruited Owen Meany and Nike for more menial tasks.

In her senior years Val took on the role of elderly aunt as hordes of foster kittens paraded through the bookstore, teaching them deportment and table manners and making sure they went on into the world as exemplary citizens. She was not above cuffing them in a corrective manner.

Finally, when her time came she made her own decision, making clear her intent to leave this world Saturday morning. Our beloved vet helped ease her out with no more suffering, and we all cried our eyes out together. Valkyttie left wrapped in the pink fuzzy blanket she loved to lie on and look out the window.

We shall miss her, but we are confident that she crossed the rainbow bridge in a sedan chair with gold leaf, borne by four Corgis. Even now she is greeting other famous bookstore cats, including Anna-Boo, who left this world in April, and Hazel, of this blog fame last year. We like to think the bookshop cats cross into human heaven by day, staff bookshops there (for what would heaven be without bookstores!) and then come home to kitty heaven at night to eat salmon from diamond plates.

Enjoy, Valkyttie. We loved and love you!