“In a place like Paris, the air is so thick with dreams they clog the streets and take all the good tables at the cafés. Poets and writers, models and designers, painters and sculptors, actors and directors, lovers and escapists, they flock to the City of Lights. That night at Polly’s, the table spilled over with the rapture of pilgrims who have found their temple. That night, among new friends and safe at Shakespeare and Company, I felt it too. Hope is a most beautiful drug.” 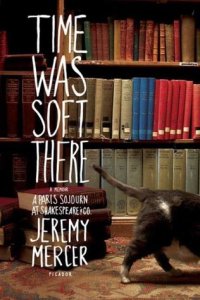 Jack and I got the idea for using shopsitters at our place – people who receive free room and board in return for living there – from Shakespeare and Co. This is a famous bookstore across from Notre Dame Cathedral in Paris.

On a listserv of bookshop owners, talk turned to books about bookstores. (I received ego strokes, and then we went on.) Mercer stayed at the shop for some time, watching the ebb and flow of people who ranged from down and outs to up and comings. He also spent significant time with George, the shop owner (although not its founder – Sylvia Beach did that) and some of the regulars.

Mercer’s book is in many ways journalistic, showing his roots as a true crime writer. Yet he portrays the under humanity so simply with his “this is what happened” prose. One of the blurbs on the back calls the book a romanticized version of the bum’s life, but I don’t agree. The book is far less romantic than wistful.

Among the things Mercer does is get George’s daughter to visit, and ultimately secure the shop’s future. It has a fascinating history: closed during the Nazi Era, considered a hothouse of sedition in the 1960s student riots, monitored by the CIA in the 1990s if George is to be believed.

There are a couple of startling moments: an ethnic hate crime results in murder and Mercer is less concerned about the murder than the police sniffing around a bookstore full of people with improper visas to be in France. He seems more concerned when the 84-year-old George gets engaged to 20-year-old shop worker Eva. That kind of thing. It all just sails past, along with the adorable moments of scorn for “30 minute tourists” who just want to stick their head in the door because the place is famous, having no understanding of or interest in its true ethos.

And there’s a very funny cynicism to the scheme three residents come up with, to sit and write in front of the tourists and sell the pages, story by short story. The description of this was, quite frankly, laugh out loud funny.

This isn’t a story about books, but about the bookstore itself, its inhabitants, and its purpose. Mercer’s final paragraph is a good summation: “In the end, yes, it is a famous bookstore and, yes, it is of no small literary importance. But more than anything, Shakespeare and Company is a refuge, like the church across the river. A place where the owner allows everyone to take what they need and give what they can.”

4 thoughts on “The Monday Book: TIME WAS SOFT THERE by Jeremy Mercer”