Jack and I swung past Colonial Williamsburg on our way home from DC, as neither of us had visited before. And guess what… they were having a Southern Textiles display!

Poor Jack – it was his birthday and all, but he passed a pleasant hour in the mental hospital exhibit while I went, stitch by stitch, through the museum with the curator, who was delighted to have someone who liked needlework with which to discuss its intricacies.

But there was one piece Jack and I could both enjoy before he left – this quilt from the early 1800s, done by a lady with eleven children. Three of her quilts, all gifts to her kids when they got married, hung in the exhibit. After viewing this one, all I can say is, she must not have liked her daughter’s chosen husband. 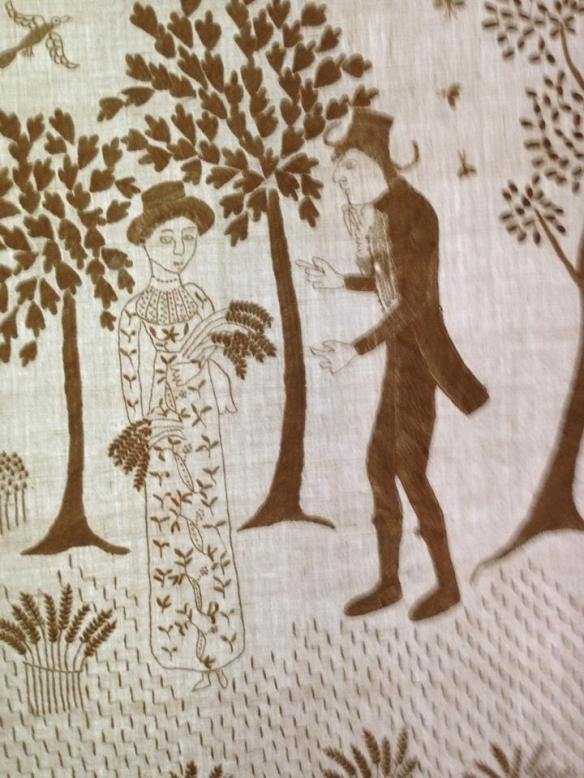 That girl definitely looks dubious, and if Jack had courted me hunched over and grabby like that, things would have turned out different.

Come all you fair and tender ladies

It’s a ballad Jack and I sing often when teaching Transatlantic balladry, as versions are found in the British Isles and the Appalachian Mountains. And it definitely applies to this poor child. The exhibit never told how those marriages ended, but I was reminded of the short story A Jury of her Peers. This is the piece in the literature textbook that every school child in America remembers as “that quilt story about the murder.”

Two women come to the house of a third who may or may not have murdered her husband, and as their husbands tramp about looking for clues, they discover via her quilting that she did it, because her husband killed her beloved pet. And they hide the fact from their husbands, who have been condescending to them about their wanting to take the piece work to the jailed woman, so she’d have something to do. It’s like that other great short story Lamb to the Slaughter, where the cops eat the evidence (woman kills her adulterous husband with a frozen leg of lamb, then cooks it up for the investigators) because they can’t expect a woman to 1) kill and 2) be smart enough to cover it up.

I love textiles. And one of the best parts of the visit was talking to the guide about the division between samplers that had religious poems–of which there were many–versus nature scenes in them. I speculated that the girls who did animals may have been of a slightly rebellious nature, tomboys, and she shot me a shrewd look. 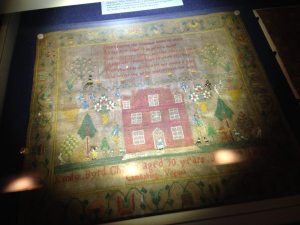 “I actually speculate that it was the other way ’round and the roughest girls were set pieces with the strictest verses,” she said. “Look at this one.” She pointed out a sampler about devotion and piety, very badly stitched. “This kid was pretty much sabotaging her own work, more power to her.”

Attagirl, girls. I love the power of women in subtle things – since the 1600s, when life hands us needles, we jab them into that which annoy us. :]

2 thoughts on “Think Pretty Maids how you Court Young Men”