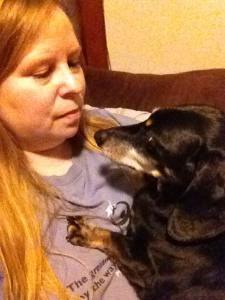 Our friends Elissa and Joe lost their beloved elder-dachshund Black Jack today. Black Jack was the patriarch of a herd of ten at the Powers-Lewis home, some fosters, some permanent, all members of the family.

In the same way that Valkyttie (now of blessed memory) was the icon for our bookstore, Black Jack was the poster dog for the work Elissa did with In His Hands Small Animal Rescue. A protective dog, BJ fiercely guarded his Mama from ladybugs, falling leaves, and sometimes other rescues. If Black Jack said a foster wasn’t staying, well, best not be in town when the sun went down.

Rescuers love all animals, and we all love our animals, so it’s doubly sad when a grandfather figure like Black Jack passes – not that BJ was EVER a grandfather, I hasten to add. Despite his good looks and impeccable pedigree as a Black-and-Tan, he was neutered at a young age, and barked often and passionately at dachshund gatherings about the importance of spays and neuters. An advocate against backyard breeders as well as for responsible dachshund ownership, BJ leaves a legacy better than any litter: he and his family can be proud of their part in keeping Southwest Virginia aware that, no matter how “special” the breed, dogs should not be gotten from breeders, but rescues.

The Rainbow Bridge is happy for the pet who leaves, returning to health and vitality as he sheds years to bound across, but oh so very hard for those of us left behind. We miss them; how could we not? And yet, when we have made the most agonizing decision a responsible pet owner can make, and cradled our loved ones into a new world with no pain, we know we have done right by them. Joe and Elissa did right by their Elder Wiener, and continue to do right by their herd of sausage dogs, despite the sadness that floods the pack tonight.

So we say goodbye to Black Jack, aged 16 years and one month, who probably did not bound over the bridge with ears and tail flopping today. No, we think Black Jack would have made the crossing in a teak sedan chair borne by four Maine Coon cats, with a chi-corgi mix doing back flips and juggling ahead of him. I picture his faux-fur robes of purple trimmed with silver glitter, and his scepter would be a rawhide bone – lightly chewed, of course. You’ve heard of three-dog nights? Black Jack was a three-breakfast dog.

You go, BJ! You were loved and will be missed. But go knowing your story of being a black-and-tan neuter with so much more to give than puppies will be told again and again, amid laughter and tears. 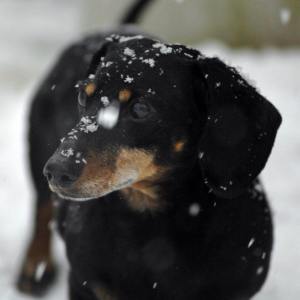