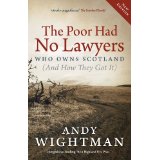 Every year when I run my small group tour of Scotland I try to find a book for the times it’s my turn to guard the luggage on the bus while the group are visiting an attraction or having lunch. Of course, having a continuing interest in Scottish politics, I often seek out books about such matters.

This year my choice was ‘The Poor had no Lawyers’ by Andy Wightman.

This fascinating and very well researched book traces the scandalous story of what can only be described as blatant theft, all the way from the Reformation to the present day. It tells the story of land-owning Lords sitting in the non-elected upper chamber of the UK parliament deliberately sabotaging any attempt to modernize the law; of plucky crofters and islanders taking them on and winning; of the recently re-constituted Scottish parliament finally having the time and inclination to make changes that the House of Lords can’t block.

What I should also make clear is that the book mainly deals with the ownership of very large areas by a very few people with often highly dubious legal claims.

In case this sounds terribly serious and parochial, there’s a great deal of humor and not just from Wightman. Some of the official reports produced down the years by serious minded researchers are hilarious in places! There is also much comparison with land ownership in other parts of the world – particularly de-colonized countries in Africa and Asia.

What really sticks out is that the separate legal professions in England and Scotland are both tied tightly into the ruling (and land-owning) establishment and, rather than offering a means to redress the obvious injustices, tend to ‘circle the wagons’ and protect their own interests.

I found this book completely absorbing, eye-opening and revelatory. For anyone with even a passing interest in Scottish social history or politics this is a ‘must read’!