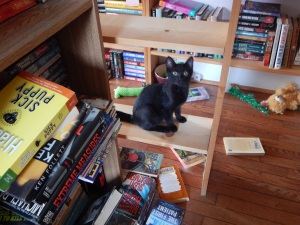 I try to be a good foster mom. I really do.

The mystery room has been taken over by eight fuzzy little miscreants, and just as one was adopted yesterday, an emergency came in. Yeah, it’s been that kind of summer. The emergency kitten – we named her Miss Kitty Butler – is a Russian blue with brown eyes, a lovely wee thing who narrowly missed getting squished on the side of the road. She’s not supposed to be here, but it was better than the alternative.

Now, with eight kittens, and our dear Mrs. Hudson adopted a month ago, you can imagine the state of things. We keep on top of the boxes (which all the kittens are using like champs, in every sense) but they have a kitty tube, a climbing tree, a spiral hat, two dangly toys, assorted jingle balls, and about a thousand catnip mice in there.

We open the door by day, and herd them in at night. When I open the door the next morning with their (two) plates of wet food, they swarm my ankles like fuzzy piranhas, meat-seeking missiles. While they eat, I tidy the room. Which is a lot like Sisyphus pushing his rock up the hill, because the kitties have discovered the joys of tunneling through our new shelves. See, we just redid the mystery room about two weeks ago: new shelves, better classification system, and a big tidy that included Saint Anne buffing and rewaxing all the floors.

Yeah, good thing we got it tidied.

Every morning the kittens have created new tunnels between the central shelf’s lowest level, pushing Ed McBain, Mariah Stewart, and Charlotte MacLeod out of the way in great strings of books across the floor. These fallen soldiers of the kitten wars were, the first week or so, restacked with careful attention to titles and authors, turned sideways to allow a tunnel left open for the fur babies, and given a little tlc.

The kittens ignored the prefabricated tunnels and created more. Ridley Pearson. Richard North Patterson. When they shoved our 200 Robert Parker novels out of the way, I knew they meant business. You mess with Spenser for Hire, nobody is safe.

So I’ve stopped worrying about the kitten tunnels, and just shove those titles willy-nilly back under the bottom shelf each morning. Charlotte and Ridley have grown….close. Entwined, one might say. I’m pretty sure some of the Stewarts are pregnant, and will give birth to slim volumes of Harlequin Suspenses. Sigh…..

We ensure the kitties never give birth. It’s been a bad year for people forgetting their responsibilities, and these are the result. But I’m not sure how to fix the Stewarts…