Not Quite a Diva

So the Celtic Festival is upon us, which explains why neither Jack nor Wendy can get a blog post out between getting the flags and signs to each venue, handing out towels to musicians overflowing the bookstore – I don’t even know the names of the guys sleeping in the Science Fiction section – and feeding the foster cats. 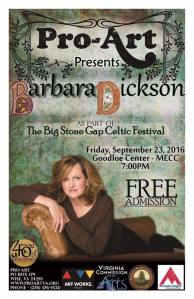 It’s all bedlam and bagpipes right now, and we wouldn’t have it any other way, but the cat rescue  still needs to be looked after. Appalachian Feline Friends is primarily a foster organization, but has a small place where we hold cats between leaving the local shelter and entering foster or forever families. AFF had an unexpected and urgent opportunity to empty four cages from the shelter, so in the midst of all the musical mayhem, when a fellow cat lover was able to pull them, I needed to figure out how to get the kitties into the holding tank by myself, since Jack was up to his eyebrows in parade plans.

Enter Barbara Dickson, singer-guitarist extraordinaire and this year’s festival headliner. She and Jack are old friends, from their shared hometown of Dunfermline, Fife. When I called the bookstore from the vet’s office to see if anyone had ten minutes to spare, I was told “Barbara will meet you out front.” She marched herself into the car, settled one of the carriers on her lap, and said, “Right, we’re off.”

At the holding tank, I warned her that there might be a certain catishness to the place, and she waved a hand. When I opened the door, she took a sniff and said, “Right. Where’s the broom and the mop bucket?”

For the next hour and a half, as I fed and watered and cuddled kitties, Barbara swept, mopped, and cleaned up suspicious stains. We had a blast. When I thanked her profusely, she said, “Pff. I love cats.”

And the next day, Barbara put on a dress, put up her hair, and delivered a standing ovation concert to open the Big Stone Celtic Festival.

5 responses to “Not Quite a Diva”