For some reason that I can’t fathom we’re getting a lot of out of town (and out of State) visitors to the bookstore and the cafe just now. It’s not the season for school reunions or vacations, and although some folk have deliberately detoured this way because of reading ‘The Little Bookstore’ many of them haven’t.

It seems to be a completely random thing – just passing through or maybe here for a funeral or family visit.

Quite apart from the welcome business, it adds to the busyness! I love it when strangers come in when we have local loyal friends of the place just hanging out and everyone ends up swapping stories.

1) A couple drove for five hours from Elkins in WV yesterday because they had read the book. They visited yesterday afternoon then came back this morning as soon as we opened and stayed on for lunch. As they were leaving they said they’d be back soon. Of course they had dinner in town last night then stayed overnight in a local hotel and had breakfast before heading back here and encountering the hanging out crowd.

2) A gentleman drove up from Johnson City simply because he heard a repeat broadcast on the local NPR station of an interview with Wendy about the store. As soon as he heard my voice he said “you’re the guy on WETSfm that has the Celtic show”. I’ve been presenting Celtic Clanjamphry every week for almost ten years as an unpaid volunteer and, in return they now count that as sponsorship by Tales of the Lonesome Pine, so we get a mention on air as well. 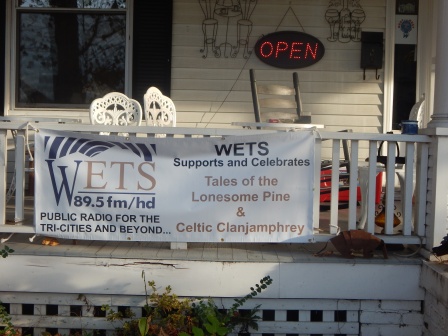 Just two examples of how new customers arrive at the door. Of course they are, for different reasons, already pretty well primed to be ‘on side’. The challenge for anyone who runs this kind of shop is to try to read the personality of the completely ‘cold callers’ and respond appropriately. As I said at the beginning we had a good few of them as well. One couple were quiet and focused and I simply responded to their occasional request while another guy started like that, then encountered a kitten and became much more engaged. On the one hand you have to like people to do this job, but on the other hand you have to be able to quickly read people too.