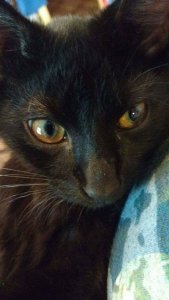 Okay, you people, listen up because I have just about had it, do you hear me?

I came here as a kitten with my brother Oreo after my mom died, and a week later he disappeared. They told me he’d been “adopted.” Sure. They killed him and stuffed his body somewhere.

So time goes by – I don’t know how much, okay? I’m a cat; it’s not like we wear watches or anything – and they’re feeding me wet stuff and there’s lots of cats here to talk to, although none of them knows where my brother is beyond that “gone to his forever home” thing, which sounds ominous to me. Still, being here, it’s not all bad, is what I’m saying. Or it wasn’t.

They kept trying to touch me. Some weird human fetish, I guess, they wanted to “pet” me, which means they bothered me when I was eating. Although I admit that spinal swipe thing feels kinda nice.

Anyway, one day they put down the wet food like always, and I start in, and suddenly the chick is behind me – there’s two chicks and a guy do most of the cat stuff here; don’t ask me about the relationships; humans are weird – and she grabs me. Hard. Tight. Scary.

I scream and struggle but she stuffs me in this box, and then we’re moving, and then I’m in this place full of barking dogs and this other lady has this needle – like two feet long, I’m telling you – and she STICKS IT IN ME!!!!

Next thing I know they’re all dancing around saying “she tested negative” and telling me how great this is, but I’m back in the see-through box with the hard sides, and my leg is killing me, and I’m just plotting how I can take them all down in one good karate bite-kick-chop. I’ve got moves these girls haven’t seen yet.

But I let it go, because they take me back to the place with all the wet food and cats, and the other cats, some of them got stuck too, so we’re all limping around trading war stories, and I’m a little more careful after that. No more unexpected grabbing.

Fool me once, shame on you, fool me twice, shame on me, right? This morning when the chick puts down wet food and gets all sweet and sneaky standing nearby, I know something’s up. I don’t bite. Literally. No wet food for me. And I think that’s the end of it.

Do you know what that bi–chick did? She waited until I was IN THE LITTER BOX. Is NOTHING private any more in this hellhole?

She grabs me – mid-stream, mind you – and I’m fighting for all I’m worth but the other chick appears from nowhere, and it’s back in the hard box with the see-through sides, and we’re moving again, and I think I’m going back to the barking dogs and scary smells place but after a LONG time (and I can hear other cats as we’re moving, but none of us know where we’re going) suddenly we’re in this bright room, and it’s again with the needle, but instead of it hurting the room starts spinning, and then it’s dark…

..and I wake up on this soft mattress and this lady with red hair is saying I was “so brave” and “everything’s fine” and I’m thinking “you don’t know for fine, bitch, just put your face a little closer to those bars.”

The other girls who came here with me, they’re all waking up too, and we’re exchanging notes, and we’ve all got sore tummies and little scars, and one of ’em, she heard from her mom, this is called “spraying.” We’ve all been sprayed.

I did not sign a consent form. That said, I don’t object to the idea I’ll never have to worry about raising kids. I saw how Mom struggled with Oreo and me before she got sick, how she worried about us as she was dying. All she wanted was for us to have it better, so no, I don’t want that responsibility. Still and all, it would have been nice to be asked. And that litter box scoop? No. Just, no.

Goes to show, you can’t trust anyone. Think I’ll be letting my guard down, that human hands will ever touch me again? Ha. No. Nyet. Not this little tuxedo cat. Nope.

I’ve got my eye on you, people.

Editor’s note: it is assumed by the staff cats and humans of the Little Bookstore that Miss, ehm, “Delight” will be staying with us indefinitely. While we welcome inquiries into her adoption, we recognize that it would be difficult to catch her in pursuit of such an option. Also, her personality is… challenging. Thus she may spend her days in our basement, eating, sleeping, and coming and going as she pleases. We have been advised by Owen Meany, esquire, that she has sought his legal counsel and an injunction has been filed against further caressing, touching, or medical procedures.

Good thing we got her spayed. That’s all that matters.

1 thought on “Delight is Not Happy”