The Monday Book falls on a Tuesday this week due to Celtic Festivals and kitten spays. 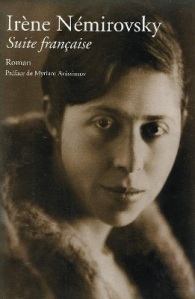 Irene Nemirovsky was a Ukranian-born Jewish woman who lived in Paris and enjoyed a successful writing  career. She planned five short novels to be part of a book titled Suite Francaise, but she had only written two and drafted the third when she was rounded up, deported, and murdered.

What’s amazing about the first novel “Storm in June” is how accurately it describes something ongoing. Nemirovsky never got the luxury of time to contemplate what she saw, so her characterizations of the upper class family, the pompous writer, the sweet middle-class couple, and the nasty antiques dealer fleeing (or trying to flee) Paris sprang almost fully formed as she watched it unfold in front of her. I wonder who (or how many) of her colleagues she skewered in the darkly hysterical portrait of the famous author and his mistress as they flee, first in pomp and style, then with whatever diminishing wits they can gather about them.

Then there’s “Dolce,” from which a film is/has been made. It’s more of an expected war story: women whose husbands are prisoners in Germany house German officers as occupiers; add community sentiment and stir. It’s fairly predictable. But “Storm in June” is amazing in its details of what human hearts turn into when combined with fear, breakdown of social order, and a few sudden chances to change everything. Nemirovsky saw through a lot of veneers.

The manuscripts were finally published in this century, when her daughter opened the suitcase and read them, realized they were novels rather than journals, and sent them to Denoel, a large publishing house. “Storm in June” is pretty much genius, making you laugh and sob at the same time.

How many people did we lose in that storm, who would have made us laugh or cry today?