GUY HAS LEFT THE BUILDING

Guy has left the building. And he did it his way—by falling off the bed in his sleep, resulting in a dizzying wake-up lurching motion that sent his mama racing to the emergency clinic, Guy in her lap.

Turned out, Guy was telling his people something with that fall. He was gravely ill with a silent killer and entering the doggie equivalent of dementia.

Let me tell you, if love could protect a dog from harm, Guy would still be with us now. Because love saved him from active harm in the first place. He arrived at Joe and Elissa’s house a bundle of bones and needs, neglected to near-death by owners who had no business claiming ownership of anything with a heartbeat. His name, Guy, came from Joe calling him “a cheerful little guy for all he’s been through.”

That was our Guy: whatever you did, whatever was happening, however it turned out, it was all good, man. Here, rub mah belleh and you’ll feel better. Just, chill, dude. That was Guy’s philosophy of life.

While you were chilling, though, Guy could get his nose down your waistband faster than any dog—human or canine—I’d ever met. Little fuzzy Guy was something of a predator when it came to women’s clothing. He pushed in, and you just didn’t have the heart to push back, because what could one little Guy do? Until his nose was in your crotch, inside your trousers. Far be it from me to speak ill of the dead, but Guy, you were pushing it big time, buddy. I think you left some lawsuits behind. 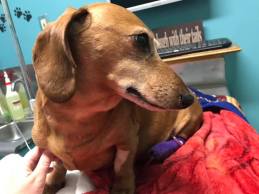 Guy crossed the Rainbow Bridge this morning. More correctly, Guy left the building, but whether he’s crossed the Bridge by now, well… you had to know our Guy. He could turn a two-minute walk into a twenty-minute discovery adventure. He never met a turtle he wouldn’t race. Never saw a puddle he didn’t want to splash in. Nor a pillow he didn’t want to test for softness, and then you could come back later…

So Guy is probably about halfway across the Bridge by now, meandering with a sniff here, a lifted leg there, perhaps a nap in one of the sunbeams before proceeding. He will pause several times to admire his reflection in the water. Guy had eyelashes that supermodels would kill for, this baby, fringing molten pools of liquid black gold. Little plump thing could melt you with his eyes.

And if there are humans on the Bridge, he will be leaning against their legs, giving them the limpid black eyes treatment, and, when they bend to say “What a sweet little guy,” he will be ramming his needle nose down their trousers. It was a practiced move and he will see no reason to stop now he’s in Doggie Heaven. Heck, that IS his Doggie Heaven.

When he finally reaches the far shore, Guy will be greeted by his foster brother Black Jack, who will try to entice him to use the trampoline, go to the steak luau, maybe even watch the movie (you wouldn’t have heard of it. They have their own canine producers across The Bridge). And Black Jack will, in the end, and with a sigh, show Guy to the soft plush pillows near the Heat Vents, and Guy will settle in, with a happy sigh, and dream of turtles.

8 responses to “GUY HAS LEFT THE BUILDING”