Jack and I adore watching the prairie dogs, of which there are many along the back highways of South Dakota. We pull over and sit a few minutes, and once they get used to us, the TV show starts right up. “Welcome to KDOG, the number one viewer choice for Black Hills entertainment!”

We got pretty good at spotting the little mounds and holes of earth among grasses that signals one of these encampments, and congratulated ourselves on being good hunters.

And then we passed the buffalo….

Three Wildlife loops and two hikes into our stay in Custer State Park, we’d seen neither hide nor horn of the great bison. Since Jack had never seen a buffalo in his entire life, I was beginning to feel a failure as a tour guide.

One night just about dusk we set out to do the Wildlife Road inside the park, confident that our ability to stay up past 9 pm would be rewarded.

So when I came upon a man driving the other way, stopped in the middle of the road taking a picture to one side, I was mildly annoyed. “Outta my way, son, we’re huntin’ buffalo!”

As we accelerated past him, Jack looked back and said, “Oh, it’s one of those big black things.”

“A bear?!” I shrieked, driving faster. Our windows were down.

“Nah. You know.” He made gestures with his hands, describing something that could have been a VW bug or a breadbasket. “What do you call the things we’re looking for again?”

“Buffalo,” I said, already scanning the horizon. Then it dawned (or dusked) on me. “That was a buffalo?”
“Yeah,” said Jack. “Right next to the road.  Maybe ten feet away.”

So I’m sure there is a life lesson in here somewhere, kids. Don’t look too hard for something or you’ll miss the fact that it’s standing eight feet off your right shoulder as you scan the horizon. On a positive note, Jack said he could count its curls, and now he’d seen a buffalo that close, he never wanted to see another in such proximity again.

This guy was enjoying the sun a ways off the highway as we traveled route 2.

And this guy was at the entrance to the park when we came back. 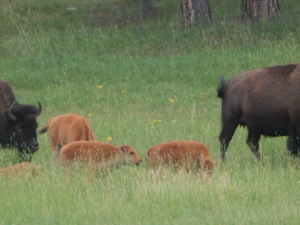 They aren’t actually penned in. A stretch of road that must be near their rounds has a cattle crossing grid at each end of it, and this hog wire fencing on one side. I think the rangers must have gotten tired of cleaning up buffalo and tourist parts from close encounters. 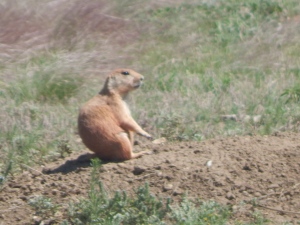 And in keeping with the spirit of the adventure, when I finished photographing the distant buffalo off highway 2, this prairie dog was about two feet from my feet, scolding me. “What am I, chopped liver?”

If bucket lists exist, then there must also be “sieve lists”–things you never planned to do that suddenly stick in the mesh as life’s waters rush by. Here are a few of mine that stick out:

We’ve been to the Revolutionary War cemetery in Dandridge, TN

It was an accident. One crisp fall weekend Jack and I did an event requiring a hotel too near Dollywood, and when we got up in the morning, access to the freeway was so clogged, we took off down a side road and navigated by map. When we got to Dandridge, we stopped just because we’d never been to Dandridge, found the cemetery, and spent a pleasant hour on the self-guided tour, picking out Scots and Scots-Irish settlers. Jack and I often comment about the difference between “old” in the US and UK: we’ve visited 1200s ruins there, and functioning 1400s hunting lodges. But here was an “old” cemetery with real people who had done significant things, whose names had been lost by wind, time, and weather to everything but the printed tourism brochure. Jack and I have had a lot of moments like this, when Plan A gets tossed at the last second and we come up with a Plan B on the fly. Sure, we wind up with the occasional disaster, but more often we get magic moments like that day.

Sieve list lesson: don’t be afraid to strike out down the side road

I spent several hours in a school shooting lock-down

It turned out the gunman was a hoax called in by a deranged student. But those of us who spent that January night listening for footsteps beneath howling winds comingled with sirens didn’t know that. I’m not recommending expectation of death as a mental exercise, but a surprising amount of clarity lingers when fear dissolves into a second chance.

Sieve list lesson: second chances are unexpected gifts of grace; take your best shot when you get one

I taught students that thinking was grounded in, yet different from, knowing facts

Teaching Cultural Geography et al was first for fun, then for money, and then for love. Finally I stopped because the politics of adjuncting overwhelmed the joy. But I had no idea how much I would love teaching until I saw students–mid-lecture or classroom exercise–connect with whatever concept we were covering. Sure, every teacher is excited by students who really wanted to learn, but sometimes who got hit upside the head with a new perspective was as startling to you, the teacher, as to them. Kids shuffling toward mediocrity would suddenly blink, and you could see that, willing or not, the moment of truth had captured them. I’m sure some of them pushed these epiphanies back down under the latest recreational diversion, but a wave of understanding still swamped their world, creating empathy, forcing awareness. Dear God in Heaven, I loved those moments. I miss them.

Sieve list lesson: good, right, best, and ethical are tricky negotiations; do the best you can

I got a book published

Writing was always on my bucket list; publishing, not. To paraphrase my friend Jane Yolen, publishing isn’t something writers get to be in charge of; we write, and the chips fall. The process of turning writing into publishing proved to be fun hard work that really did change my life–mostly because Little Bookstore was about such an integral part of my life. Publishing enriches you with money sometimes, but more with people. As an introvert, I was at first nervous when readers traveled to the bookstore wanting to chat, but my extrovert husband showed me what a gift a different perspective brings. It still amazes me how differently the people who loved Little Bookstore think from each other in terms of politics, religion, what life should be like, etc. And sure, it’s a quick ego stroke when people like your book, but then it flies past ego and comes around full circle to a kind of grateful bewilderment, even true friendship sometimes. A lot of interesting, cool, fun people hang out in the word world.

Sieve list lesson: what you think is the core (or payoff) may not be; be surprised by joy