I Know Why the Cat Toy Sings 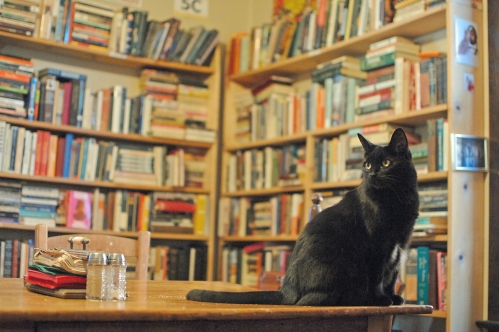 Jack and I foster shelter cats in our bookstore. It is a convenient place to offer potential adopters hands-on time. Right now we have three staff cats, plus two young’uns we’re sitting for a friend on holiday. A family of seven will arrive this afternoon: mom plus six infants whose last day at the shelter has come.

The woman who asked us to sit her cats gave us a boatload of Caternalia: kibble, litter, and a large plastic bag full of toys other animal lovers had donated. The toys include one of those rings with embedded balls, which has sent little Owen Meany (staff kitten) into paroxysms of joy for about 36 hours now.

Among the felt mice, plastic coils and little balls with bells sat a robin, looking innocuous enough. But when the bag moved, the robin sang. It took us a few tries to isolate the noisy toy and its annoyingly cheerful whistle.

Once we had, my wise husband walked to the trash can and opened the lid. Before he could consign the robin to its smelly grave, Val-kyttie, the Senior house animal, reached out and sniffed it, then batted Jack’s hand. Val-kyttie is seventeen, Scottish, senile, and Alpha Dog. No longer can she jump to her preferred bookshelf lounging point, so she stands at the bottom and meows until a human staffer lifts her. She eats soft cat food, sleeps eighteen hours a day (eight of them curled atop Jack’s head) and spends her waking shift being shop curmudgeon.

She’s not happy about the fostering. The first time we brought home a cat family down on its luck, she peed on all four bed pillows in one blast–something she’d never done before and hasn’t since. Internet advice says this signals “extreme anger issues.” We explained that she was herself a foundling who came to us at a mere four weeks of age, but despite her Quaker upbringing, Val-kyttie has not developed a sense of empathy.

She did acquire the singing robin toy, because there’s nothing like a little parental guilt to motivate otherwise sensible adults into doing things they know they’ll regret. Jack laid it on the floor so Val-kyttie could bat it with her paw–a Cheshire grin playing across her face. When she later meowed to be lifted, the robin waited next to her; as Jack reached down, she snatched it up in her mouth.

Even now she is lying, contented, on the shelf designated the “Shady Rest Home” porch, surveying her garden with the robin nestled between her paws. Every time she shifts position, it sings. Throughout the day customers looked about suspiciously at the mechanical twirping. Jack and I smiled and shrugged.

Jack said to me recently, “I don’t know how much longer this can last.” Just then Val-kyttie looked ’round with a placid smile and an almost friendly lash of her tail, and as the bird sang, she nuzzled it affectionately.

And that, gentle readers, is why the uncaged bird sings. Revenge is tweet. 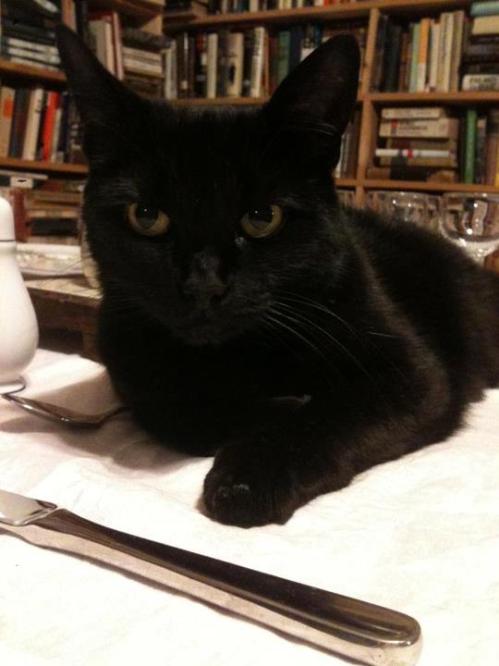 3 responses to “I Know Why the Cat Toy Sings”