I like to crochet while minding the bookstore, and joined an online crochet forum a couple of months ago. It turned out not to be much fun. A few days in, people were fussing about announcements of imminent grandchildren “disguised as crochet posts with plans to make a stupid hat or something.” 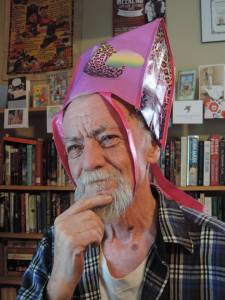 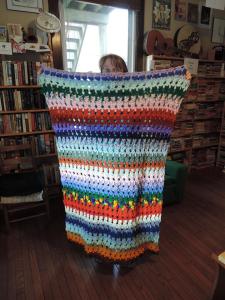 When I posted a pic of Jack wearing a needleworker’s bag on his head after a crochet-and-knit meeting at the bookstore, the message came from a list administrator that the pic had been removed and I should review the rules.

Everybody knows it’s hard to work with wool that’s too tightly wound—stuff stretches out of shape—so I got off the list. But a few days later someone (I don’t know who or how) joined me to a much bigger group, and over time they seem to be less apt to felt their fibers into itchy knicker twists.

What’s really fun about the list I’m on is how much husband-wife adorability comes up. A few weeks ago a woman went into false labor and was sent home from the hospital to “absolute and complete” bedrest. At seven months, she figured she’d be bored out of her mind, but when she reached the bed, her hubby had stacked on it several skeins of yarn, a five-pack of assorted hooks, and a boxed set of DVDs of her favorite TV show, seasons 1-5.

Now that’ s manning up, ladies and gentlemen.

Another lady’s husband got hurt on the job and has a six months recovery to endure. Depression set in and she despaired. His second week at home, he picked up one of her hooks and some yarn (which she needed for a work in progress). She kept her mouth shut and watched him produce the world’s most lopsided dishcloth, which she told him was perfect; she then photographed it and slammed the thing up on the list with a brief backstory. List members cheered his bad edgings and suggested projects, and several posted pictures of manly men crocheting. He’s about halfway through a very nice granny square afghan, after asking his wife a few days ago, “Hey, how do you change colors?”

A woman’s husband woke her Saturday past with a “get your crap out of the living room today; I’m tired of looking at it.” She gave him a baleful stare and went to see what on earth he was talking about, since she considered the living room “his mancave”—and found he’d paid $230 at an estate sale for about a ton of yarn and several boxes of hooks.

Husbands can be very sweet. So can crochet lists, if you find one where a little humanity keeps the edges in line. 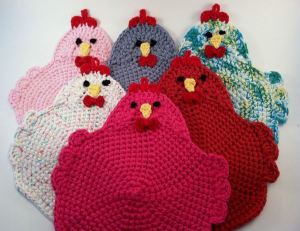