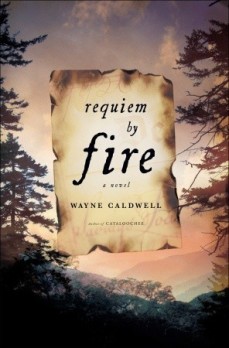 Sorry so many Mondays have slipped past. I have started many books that didn’t make me want to finish them, this past month. And then came REQUIEM, a story so enticing it makes me go to bed early just so I can read.

The book is set in the late 1920s and early 1930s, and focuses on what the establishment of the Great Smoky Mountains National Park did to the people it bumped.

I know these people – Jim the local boy who wants to return home and work, the successful man; his wife Nell who wants to follow in the footsteps of her overbearing mother and get the hell outta there to a place with electricity and running water; Silas the contrarian who will be carried off the mountain feet-first, one way or another; the lawyer who turns on his own people and gets over his regret. They sound like stereotypes, but these folk walk, eat, and most definitely talk like real North Carolinians.

The tension between the people who live on (and off of) the land, and the government officials, some clueless, some very clued up indeed, flows under the rest of the action. Actually, this book is less action than scene by scene contacts between people, dialogue sent against lightly descriptive background. I am a sucker for well-drawn characters having pithy, realistic conversations, and this book is that in spades. Not a fan of a lot of description myself, I nevertheless was hooked by the opening scene of the novel, depicting an act of benevolent arson.

The ending will not be given away in a spoiler because I haven’t finished it yet. This is a book to savor. I’m so glad to have found something that restores my faith in Appalachian fiction!