Jack hits the ground running and meets the deadline – for once – –

Regular readers may recall that I’m no fan of gardening. This goes back to my earlier life in West Fife, where the earth tends towards solid clay. So solid, in fact that I once fashioned a frog from it, let it dry in the sun (it does shine occasionally in Scotland) and couldn’t break it with a hammer! The soil was near impossible to dig and the only things that grew were weeds –

The odd thing is that my childhood hero was my Grandad, who was an enthusiastic and successful gardener. He grew vegetables and fruit for our table and roses in the front yard. But I do recall he had to dig an awful lot of horse manure in to get the ground into condition.

When Wendy and I married and moved to East Fife I was astonished at how easy it was to dig our back yard and plant potatoes. But it didn’t turn me into a gardener – the non-gardener seed had been sown long before. I grew up thinking that trying to grow stuff was some kind of Calvinist punishment for past or future sins.

But there are some outdoor chores you simply can’t get away from and for me that has been trees and grass. When we moved to Big Stone Gap we found we’d inherited three heirloom apple trees, a pear tree and a peach tree. I managed to allow one apple tree and the peach tree to die and then tried to trim one of the other apple trees, nearly killing it as well. The grass became less of a problem when I purchased a used riding mower (that’s also when I really became an American!).

Our new dwelling here in Wytheville has a big backyard with four enormous walnut trees and more equally big but more nondescript ones. The walnuts aren’t near enough to pose a danger but some of the others definitely did. One was looming over our house and the garage and the trusty odd-job man we inherited with the house took care of that. But maybe it’s just because I have a rechargeable cordless chainsaw that I eyed the smaller one that was, nevertheless, encroaching on the power line feeding the house. Or maybe I just can’t see a tree without wanting to trim it! 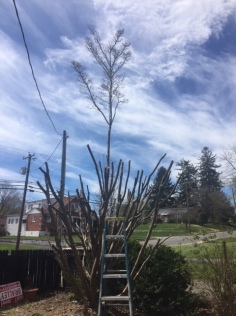 However, everywhere from New Gilston to Wytheville, Wendy and I have gotten quite good at growing tomatoes from seed, so maybe there’s still hope?